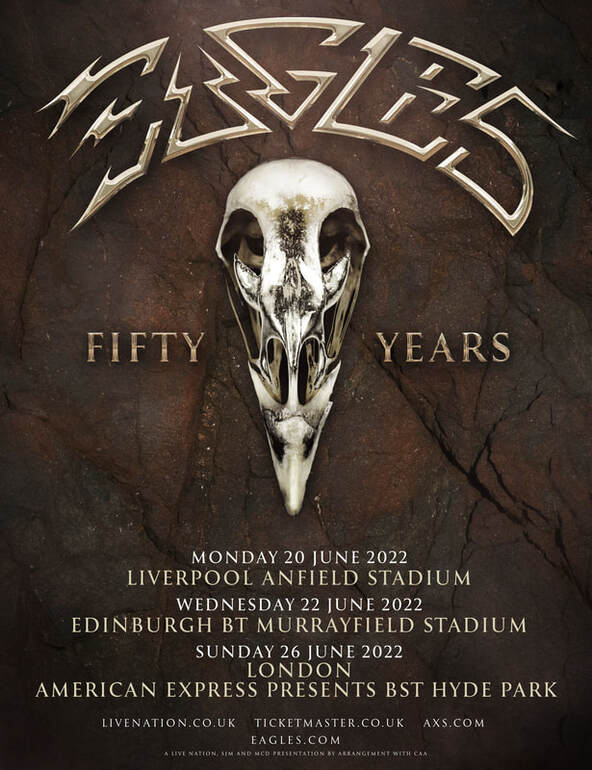 TThe EAGLES - Don Henley, Joe Walsh and Timothy B. Schmit, with Vince Gill and Deacon Frey – return to the U.K. bringing their highly anticipated and critically acclaimed tour to the U.K. in June 2022. Performing classics spanning across their career, including "Hotel California," "One of These Nights," "Life in the Fast Lane," "Desperado," and many more, the tour begins on June 17th in the Netherlands at Arnhem's, Gelredome Stadium, before making stops at Liverpool's Anfield Stadium, Edinburgh's BT Murrayfield Stadium and Dublin's Aviva Stadium before closing at London's BST Hyde Park. Tickets go on sale 9am Friday 5 November at LiveNation.co.uk.

In today's faddish, fractured, rock landscape, the Eagles retain an appeal that transcends both generation and genre, cementing the band's role as enduring musical icons. As the best-selling American band of the '70s, and one of the top-selling acts of all time, the Eagles have sold more than 200 million albums worldwide, scored six #1 albums and topped the singles charts five times. They have won six GRAMMY® Awards, were inducted into the Rock & Roll Hall of Fame in 1998, in their first year of eligibility, and received the Kennedy Center Honors in 2016. The RIAA recently certified Their Greatest Hits 1971-1977 as the best-selling album in history (38-times Platinum) and Hotel California as the third best-selling album (26-times Platinum).

Iconic, timeless and unmissable, the Eagles return to the U.K. in Summer 2022. For complete information, visit Eagles.com.