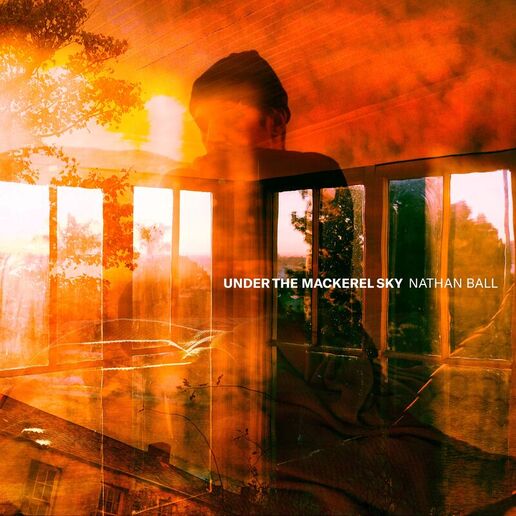 After a steady stream of teaser singles throughout 2021, Nathan Ball at long last unveils his highly anticipated debut album ‘Under the Mackerel Sky’.

A sensation of 12 indie-pop gems, the album encapsulates Nathan’s signature ethereal, electronica sound that has garnered him critical acclaim from the likes of THE INDEPENDENT and GQ. A deeply personal and poetic collection of songs, lyrical themes of heartbreak, self-reflection and sentimentalism run through the record, with Nathan citing his new life by the sea as the creative spark behind the album.

‘Under the Mackerel Sky was written during a time of great uncertainty and unknown, but also a time of reflection for me. A reflection of past and current state and speculation of what the future might be. Having been off the hamster wheel of touring for a few months, it was a time I felt truly present for once and found a real creative spark. The songs just poured out of me, it was almost as if they’d been locked up inside during the hecticness of touring, and as soon as I stopped all these emotions just rose to the surface. We made the record down here in Cornwall in an old farmhouse, and loved every minute of it. We’d surf in the morning if the waves were good and take days off if the sun was shining. We were in no rush which I think really gave the songs time to breathe and become what they deserved to be.’

Nathan has created the sound he has long envisioned, fusing folk writing with nods to house music, the blend of electronica and organic instrumentation package the tracks into one cohesive, flowing body of work.

The record is introduced with heavenly opener ‘Whispers’ which sees Nathan reflect on an early tie to the sea through his grandfather, who served in the Navy. Filled with poetic significance, ‘Whispers’ emulates BBC Radio 4’s ‘The Shipping Forecast’ which Nathan recalls using as a sleep aid when facing anxiety - “It used to remind me of him,” he explains, “that soothing voice in the background and wondering what he might have been up to at sea.”

From the stronger beats and soft house influences in ‘Cold Rushes’ to the mellow and delicate guitar licks of ‘Drifting’, Nathan has an electrifying flair for gradually layering acoustics into a euphonious crescendo. Like calm waves rolling into crashing tides, lead single ‘Blindside’ hones this swelling melody, beginning with a tinkering piano before erupting into a manic, cymbaling chorus.

With themes of self-reflection running heavily throughout the record, “Falling Short” is a message on hopefulness, which sees Nathan reach out and pen a letter of encouragement for his younger self, while “Can’t Work You Out”, another solo conversation, is filled with frustration. “You’re just winding yourself up until there’s this eruption of emotion,” he explains, noting the production of the track is in parallel to this “I just kinda pictured screaming into a mirror until breaking point and smashing it, it was nice to have that sort of release on the record.”

For the album’s title track, Nathan drew inspiration from former Poet Laureate Sir John Betjeman and his explanation of a mackerel sky - “a change is coming” according to sailors, sea folk and fisherman. Relating this to the turbulency of recent times, Nathan said “normally in the weather it means a storm is coming, but it was in this mad world of change, that we were all in, I thought maybe it doesn’t just mean a change in the weather, maybe it’s a change in whatever the hell’s going on.” Spurred on by this intense inspiration and a poignant setting of Betjeman’s gravestone against the wild oceanic backdrop “It was one of those songs that poured out in half an hour and it was finished, it all clicked in that moment… suddenly everything made sense, for the first time in a long time.”

Gearing up for a return to the live stage, ‘Under the Mackerel Sky’ will be brought to life with Nathan’s forthcoming UK and European tour kicking off in September.

Continuing to push sonic boundaries with his pioneering genre blends, ‘Under the Mackerel Sky’ marks a milestone moment in Nathan’s blossoming trajectory. Destined to excel the hype around this burgeoning indie-pop star, Nathan’s debut album will be one for the ages.