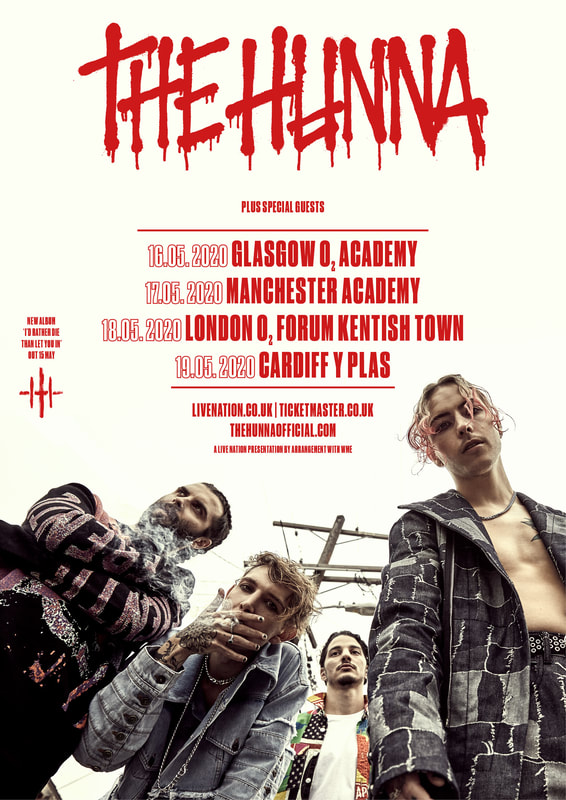 2020 will be the year of The Hunna. One of the most exciting young rock bands to emerge from the U.K. over the past few years today announces their new album, single and U.K. tour. The Hunna will kick off their U.K. tour in Glasgow on 16 May before continuing onto Manchester, London and Cardiff. Tickets go on general sale om Friday 6th March at 9am at LiveNation.co.uk
New single 'Cover You' is the stadium friendly first official track from their new album 'I'd Rather Die Than Let You Out' and features Blink 182 drummer Travis Barker.

Ryan (lead singer) says of the single "You know that feeling when you find someone and when you look at each other you know whatever you're about to do is gonna be one hell of a journey and something real special, whether it's a friendship or relationship, whatever ship, it's like 'you know if we do this, there's no going back right?' 'You in?' And no matter what they got your back. That's what this song is about. It's fucking chaos out there right now, the world is a gruesome place. It's about finding something or someone for all time in the midst of the absolute chaos around us."

Last August the band returned with a storming main stage performance at Reading & Leeds Festival, they also signed a deal with the legendary Lyor Cohen and Kevin Liles @ 300 Entertainment (for North American and Believe for rest of the world). They have spent the last few months in LA recording with John Feldmann (Fever 333, Blink 182,Biffy Clyro) and Dan Lancaster (Bring Me The Horizon). The album, 'I'd Rather Die Than Let You Out' features Travis Barker and a very special mystery guest...

Tickets go on general sale Friday 6th March at 9am at LiveNation.co.uk