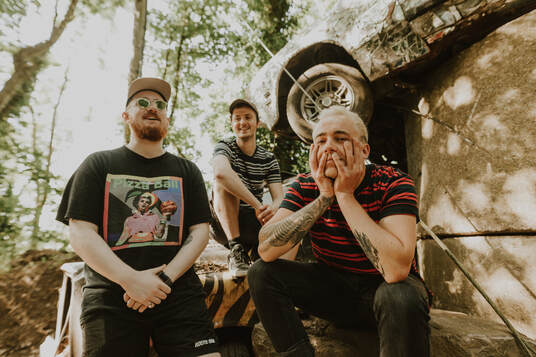 Bristol-based emo punk-rock three-piece Trashed are due to release their upcoming single ‘Memories’ on July 15th, the third single taken from their debut full-length album due later this year.

The trio take energetic punk rock and down-tune it to Slipknot depths, creating sludgy and visceral edges tied together with hooky melodies. The band slammed onto the scene with their debut single Waste Away from their subsequent debut EP Yours Not Mine in 2019, which was met with critical acclaim and saw them play a handful of successful UK shows, making a name for themselves as ones to watch, before the release of their second EP Faceplant came in the Spring of 2020.

With a 2020 full of potential ripped out from under them, the stresses of the pandemic were potent. That, mixed with a flurry of mental health issues for vocalist Jimmy, saw Trashed turn their isolation into a concept album of expression, writing eleven tracks about all aspects of their personal struggles with depression, anxiety, love, and loss.

Memories, the third single from the band’s upcoming full-length Happy In Hindsight, recorded with Neil D. Kennedy (Creeper, Boston Manor, Milk Teeth) is a break up song about a snapped heart being pulled apart by naivety. Pairing emotive heart-on-sleeve lyrics with catchy melodies and distorted guitar riffs, Memories is the perfect heartbreak anthem.

Speaking about the single, the band state, “Memories came together very quickly. It’s about trying too hard to let go of someone while your brain clings tighter and tighter to them. Of course written during a dose of heartbreak Jimmy was going through, it’s relatable and sincere… and will probably stick in your head like heartache does.”