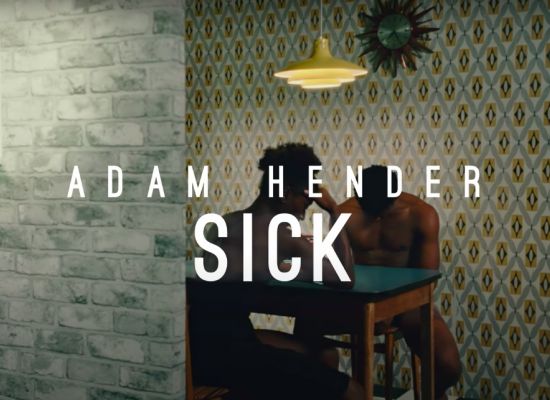 Adam Hender has released his brand new single Sick, the title track of his forthcoming debut album out October 30th via 3tone Records.

The song premiered with Clash Magazine who said, "'Sick' is a triumph... a stunning piece of music...brave and revealing. Welsh songwriter Adam Hender is moving with velocity."
'Sick' is an emotional ballad where piano adds to the heartfelt lyrics mourning the demise of a broken relationship, however rather than criticising a toxic relationship, Adam turns introspective. "I'm so sick / Sick for your loving... Look what you've done to me / You're so sick," he sings on the chorus.
"People assume that you're consistently pointing the finger, but that may necessarily not be the case," explains Adam of its conclusion, "The song really is about me, looking at myself."
The accompanying video centres around a beautiful ballet dance which represents the struggles of a relationship and its last moments, embodying the feelings captured in the song.
Adam's forthcoming debut album mixes sincere songwriting with electrifying melodies. "I like to think what I talk about is real," explains Adam, "I don't ever write something that I don't believe, because people know if it's fake."
Sick has been written between his North Wales hometown Llandudno, as well as Sweden, London and Los Angeles. It is structured in a plot which tells personal stories of love and loss with heartbreaking honesty.
Adam's talent for beautiful pop songwriting was first revealed last summer, releasing a string of singles which feature on the album including 'Don't Wake Me Up', 'One Chance', 'Burn' and 'I Don't Mind'.
They have clocked up well over a million streams on Spotify, and over 700K plays for the latter alone. They have seen Adam repeatedly featured in Radio 1's 'Best New Pop', achieve acclaim from the likes of Wonderland and Clash Magazine among others, and most recently seen him announced as Tidal's 'Rising Artist' for 2020.
Adam has become a major live draw in his homeland, selling thousands of tickets, while his perfect pop hooks and heart-wrenching lyrics see him set to become the first Welsh pop breakthrough artist for some time.
"A lot of music has come out of Wales, including classics like Tom Jones, but not recently," says Adam, on putting it back on the chart music map, "I'm not doing it for Wales exactly, but for the people who live there."
His bold songwriting and breathtaking vocals are sure to see Adam solidify the cherished support of his hometown and win the hearts of many more with the release of his debut album  Sick  as he cements himself as a distinct new UK voice in 2020.
"Breathtaking"
Clash Magazine
"Raw and relatable"
Wonderland