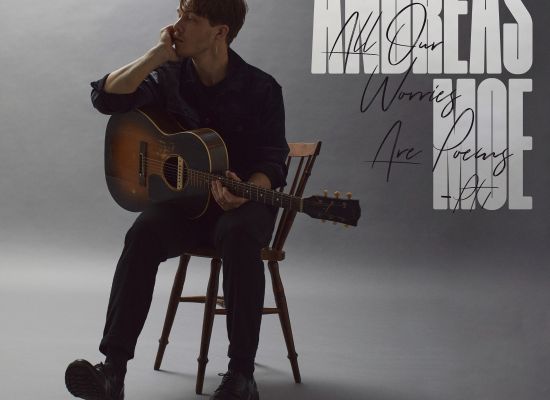 To mark the release Andreas has unveiled a performance lyric video for the new song ‘Wholeheartedly’.The EP is an uplifting collection of guitar-pop musings written during troubled times. It features brand new songs including the delicate heartfelt acoustic track ‘Rise & Fall’ and the inspiring anthem ‘Wholeheartedly', which finds Andreas casting away worries with a huge emotive vocal surrounded by rich bluesy Americana guitar.

All Our Worries Are Poems – Pt. 1 also features previously released singles including the liberating soaring pop track ‘Holding On’ and the bright feel-good ‘Hey Lulu’.

Regarding the EP Andreas says, “I’m so excited to be able to release these new songs that were all born in the middle of a pandemic. I’ve always felt proud and connected to the music I put out because each song has its own story and journey but I have to say that never before have I released music that I so genuinely feel reflects who I am and want to be as an artist. I sincerely hope this shines through when listening to the songs. // Love”

The Swedish singer has previously been behind huge hits working with the likes of Avicii, John De Sohn, Tiesto, Cheatcodes, Sabrina Carpenter, Sharon Vaughn and Corey Sanders. In 2012 Andreas made his debut as a solo artist and, in addition to his own concerts, has opened for John Mayer during two of his arena tours.

All Our Worries Are Poems – Pt. 1 is a deeply personal reflection of Andreas Moe over the past year as his genuine and sincere songwriting shines through with inescapable warmth and glorious tones.

ALL OUR WORRIES ARE POEMS – PT.1 TRACK LISTING