​CLUB PARADISE
"DON’T CALL ME OVER” 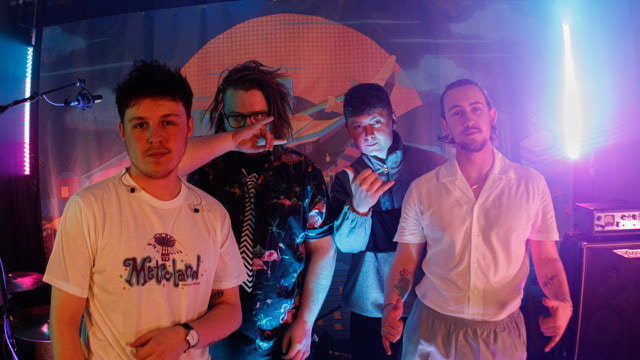 “Breezy, buoyant, and addictive, it's a sign of their blossoming abilities and unerring confidence.”
CLASH


Fresh off their euphoric last single “Do You Feel The Same?”, Newcastle four-piece Club Paradise are back with the exuberant energy of “Don’t Call Me Over”.

Softly oscillating synths and interwoven picked guitars build towards the kinetic release of the song’s massive chorus. A real floor-filler, the track brilliantly showcases Club Paradise’s signature blend of 80s pop hooks, contemporary indie-rock, and an anthemic dynamism which is all their own.

Lyrically, the song is a defiant articulation of the frustrations felt in a relationship. Front man Ryan Young explains: “I think at the time we wrote it, it’s kind of about not being made a mug of, or being made a mug of and not being entirely sure that’s what’s happening to you, until you have the chance to reflect or see it for yourself. I remember sitting down with this one lyrically and it just fell down onto the page, especially the lyric “I never had your heart, but you can take my car, I don’t think that’s how this should be” It was supposed to be pretty angry at the time but now I just feel like it's a bit of a cheeky way to call someone out, a bit smug.”

The song has long been a live favourite of the band, and fans will be excited to hear the track on record for the first time. Young adds: “We just have an absolute blast playing this one live. It’s maybe not as profound as some of our other tracks like “Do You Feel the Same?” or “Teenagers” but it’s proper groovy and it really kicks off at gigs. I remember when we first put this down as a demo ages ago and it just hasn’t changed at all - I think that speaks volumes too, having no rewrites.”

Club Paradise are on an exciting trajectory for the year to come, having received all-important support from BBC Introducing, Radio X and Clash, as well as demonstrating their capabilities as performers alongside their contemporaries and influences Friendly Fires, Foals, The Midnight and early The 1975.

Selling out their own show at Cobalt Studios, and tackling coveted slots supporting Kashmere, Vistas, Saint Raymond, Larkins and Apre, the group are already well on the way to carving a space for themselves and building a committed fanbase. Testament to this, their discography has reached 150k streams and counting. This emerging talent is certainly one to keep an eye on as the world opens back up.