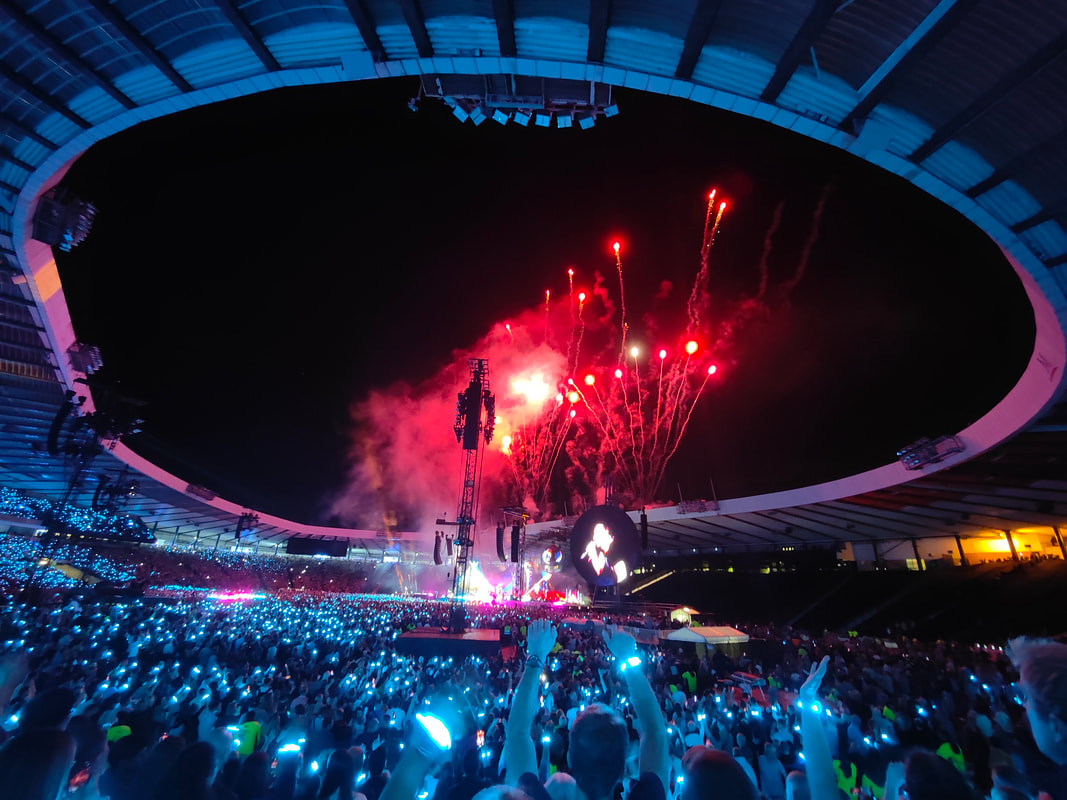 With a sold-out crowd eager to see legendary band Coldplay, Glasgow's Hampden Park was buzzing on the first of a two-night stint in the city as part of their Music of the Spheres World Tour. Opening up the show was local rising star Nina Nesbitt. The singer put on a fantastic set. Nina admitted to being overwhelmed by the size of the stadium, but this did not show in her performance. The audience seemed to really enjoy Nina's set and gave her a warm reception. After a brief interlude, H.E.R. took to the stage to warm up the crowd. Making full use of the walkway into the crowd, H.E.R. was determined to connect with the audience and definitely got the backing of the Glasgow crowd.

After a great set by both Nina Nesbitt and H.E.R. Hampden Park was well and truly ready for the main attraction. A short documentary film was shown on a loop on the big screens while the supporting act's gear was moved, raising awareness of climate change and the effect we have on the oceans and the environment. Just before the band took to the stage, two local girls introduced a short film which illustrated how Coldplay had tackled the environmental impact of their shows, using kinetic floors and audience-ridden bikes to help power the show and much more. They finished with a thank you message from the band.

With the intro video at an end, it was time for the main event. To rapturous applause, the band made their way through the audience to the centre stage. With a stunning rendition of "Higher Power" to open the show, the bar was set extremely high for the rest of the night. The lads certainly didn't disappoint. Chris Martin thanked the crowd for putting the effort in to make it to the show, acknowledging the difficulty many are facing right now. The band played through 24 of their classic hits, including "Paradise", "Viva La Vida", "Charlie Brown" and the Coldplay anthem "Yellow", interwoven with a smattering of newer material. 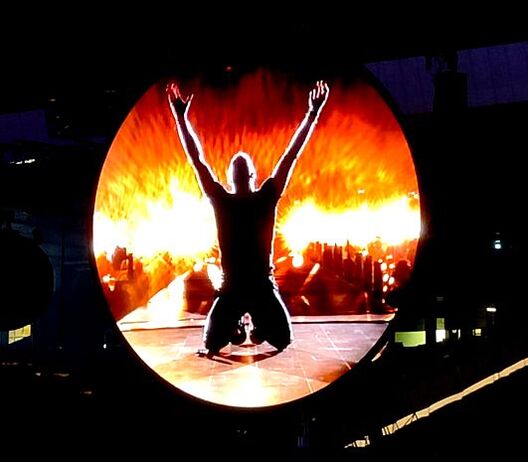 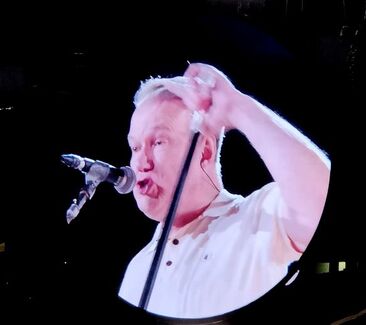 Edwyn Collins
The main show didn't go without incident, however, as Chris stopped the show during the introduction to "Infinity Sign" and asked staff at the arena to switch off the house lights on a section of the stands which had flickered on in error as the staging wouldn't look as good as it should. He also asked for a microphone to be fixed before apologising to the audience and letting them know that the interruption was not part of the show. A few moments and an apology later, a shortened version of "Infinity Sign" restarted and the show was well and truly back on track.

Belting out more crowd pleasers than you can shake a stick at, or in this case, an illuminating wristband, Coldplay proved yet again that they know how to put on an amazing show. With the interactive illuminated wristbands, they create an intimate atmosphere and make everyone from the very top to the bottom of the stadium feel a part of the show.
There was one more halt to proceedings during "A Sky Full Of Stars", with Chris asking for the audience to connect with the band and live in the moment by putting away their phones just for that one song. Most people seemed to put their phones away, and, although I was sceptical that this would make a difference, the atmosphere and energy in the crowd did seem to increase throughout the track. The confetti canons' covering the audience with paper stars was a nice touch.

With a smaller stage in the middle of the arena, the band were able to get closer to the audience on a lot of their tracks. Towards the end of the night, Chris and the lads ended up on a small, circular stage. After a moment or two taken to say hi to someone in the crowd who shouted Chris' name, the singer introduced a very special guest, the legendary Edwyn Collins. They performed the massive hit "A Girl Like You", much to the delight of the fans. Chris then let everyone know that it was in fact Edwyn's birthday, to which Edwyn started to sing "Happy Birthday to Me," and of course, the stadium joined in and wished Edwyn a very loud happy birthday.

They headed back to the main stage for the final three tracks of the night. Giving every last ounce of energy into "Humankind" and "Fix You", the band looked like they had had an amazing time and that was most certainly reciprocated by the crowd. The final track of the night was a newer one, "Biutyful", which went down well with the Glasgow crowd and topped the night off perfectly.

Overall, the night was an amazing, interactive musical experience. I am not what you could call a Coldplay fan. I like a few of their songs but haven't invested any real time in listening to their albums. It is safe to say that this review is not clouded with preconceived ideas. There is no doubt in my mind that Coldplay is a must-see band. The live experience is second to none, and with the move to create a more sustainable, environmentally aware tour, Coldplay are true pioneers in their field.

Top tip: get your light up wristband from the vendors outside of the venue. Free "Love" button badges are also available on the way in so keep your eyes peeled.
Coldplay have also just announced new dates for their 2023 tour, get your tickets for the new European and UK shows when they go on sale at 10am local time on Thursday, 25 August. Full details can be found at coldplay.com/tour.