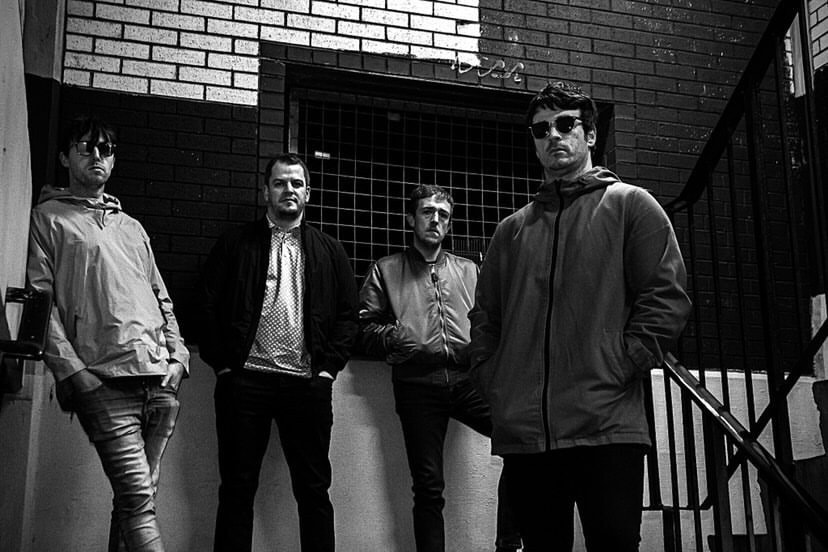 2022 has started with a bang for rapidly emerging indie rock band Columbia. They opened the year by sharing the stage headlining with English rockers The Shakes, at The Moon Club in their home city of Cardiff, where they were enthusiastically received by the crowd.

This was quickly followed up by a headline gig at The Dragonffli in Pontypool ahead of the exclusive debut album launch event, again held at The Moon, which saw a swathe of the band’s highly-anticipated debut album, ‘Embrace The Chaos’, performed as part of an exhilarating live set. Keeping up the momentum, their next gig will see them perform at The Exchange in Bristol on 24th April as guests of Cascade on their impending UK tour, before appearing in Camden at Dublin Castle on 26th June, with some even bigger things on the horizon yet to be announced.

‘Embrace The Chaos’ has been more than ten years in the making, so to say that Columbia are ecstatic about its long-awaited debut is something of an understatement.


The band have continued to write, record, and perform through the challenges faced by the music industry in recent times, to produce a collection of songs of which they can be justifiably proud. (they are also prolific - having already started work on album 2, with lead guitarist Ben lending his fine songwriting skills to some brilliant new tracks).

Writing the album was a process that evolved from writing the songs first for himself, explains Craig;

‘The album has been about 10+ years in the making. And it’s not been easy. From where I’m from, people are into drinking and football, which is fine, I love those too! But most of my friends are into dance music and not really into the music I listen to. So I know when they turn up to a show, they’re doing it to support me.

That’s a great feeling. So me trying to be a rock and roller was always going against the grain. But I like that - that sense of being the underdog from the very start, and it’s still pretty much the same now. I’ve always got that mentality of wanting to prove myself and show people what you’re about. I’ve always wanted to carve my own way’ - Craig Lewis.

With the vocal talents and rhythm guitar of frontman Craig supported by the incendiary lead guitar riffs of Ben and moody basslines of bassist Sten, the group is propelled along by the thunderous drumming of Chris - but there is much more to Columbia than sheer indie rock - there is also a personal, emotional depth and relatability in the lyrics contained in many of the songs on ‘Embrace The Chaos’.

‘This album is full of quality songs that have a lot of passion and soul running through them. They’re not just loud guitars and big drums. Listen to the words. They mean something, and we hope they mean something to those who will buy and listen to it too’ - Craig Lewis, Columbia.

Traveller’s Tunes conclude that the album ‘is a statement of intent’ which will surely confirm their place among the rock ‘n’ roll greats such as The Stereophonics, The Stone Roses, Idles, and BRMC in years to come.

‘Columbia are the most exciting band to come out of Wales since The Stereophonics’, enthuses Mark Speller of This Is The Music, having been a champion of the band from their humble yet raucous beginnings, which has included recognition from BBC Wales’ Gorwellion Horizons’ rising artists program and consistent UK and international community radio play. They certainly have the potential to achieve global recognition if ‘Embrace The Chaos’ is any indication of their early capabilities.

Standout singles ‘Keys To The Kingdom’ and ‘Glory People’ have helped to push them into the realm of talented unsigned guitar bands who have that rare ability to combine great songwriting and powerful lyrics with a sound that takes its origins from the best of the likes of Oasis and other powerhouse 90’s bands, whilst sounding refreshingly new and exciting. ‘Embrace The Chaos’ is an album that will ‘restore your faith in rock ‘n’ roll’ says Craig.

The Welsh four-piece sound more than stadium-ready on this album, and possess an energy unleashed in their recordings which leaves you feeling excited for their future as a live act..

Recorded and Engineered by Andrew Sanders at King’s Road Studios in Cardiff, ‘Embrace The Chaos’ features singer Ahsa Jane on the track ‘Glory People’ ‘We are the Glory People and we shine’ - this is, without a doubt, Columbia’s time to do exactly that. Be ready, because the chaos of Columbia is coming your way. Embrace it.