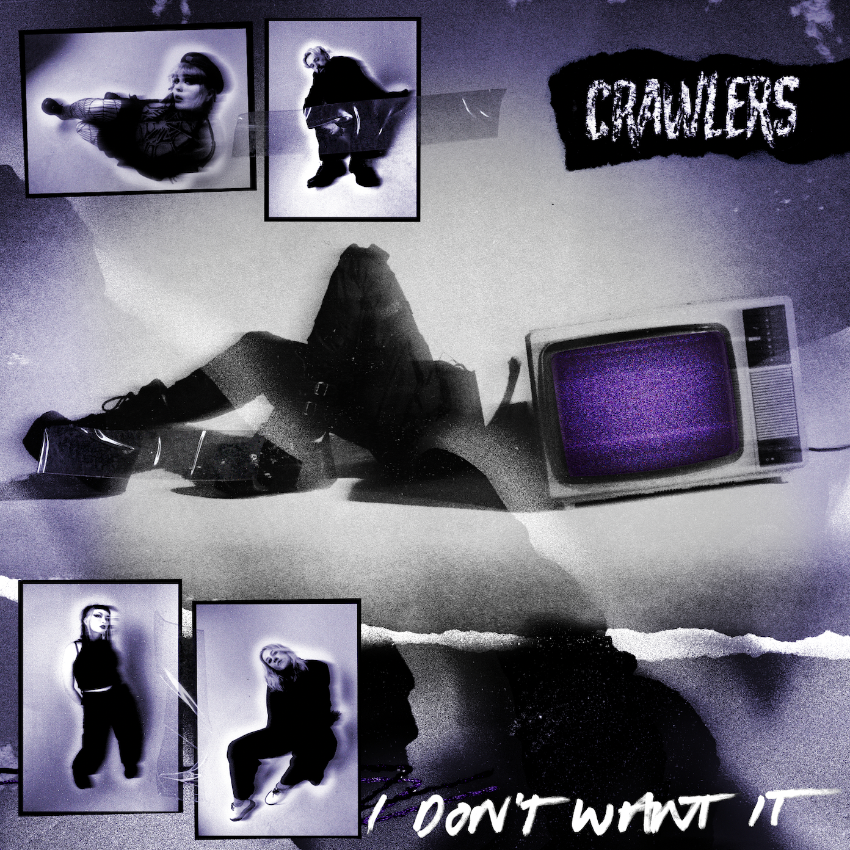 Liverpool-based four-piece CRAWLERS today share their new single. A snarling, searing alt-rock anthem fuelled by crunching riffs, spiky hooks and pummelling drums, 'I Don't Want It' will cement the quartet's reputation as the UK's most exciting new band. The group's third release on Polydor Records, 'I Don't Want It' continues the thematic explorations of previous single of 'Fuck Me (I Didn't Know How To Say)' as singer Holly Minto reflects on relationships, body image and the uncertainty of life in your early twenties.

Holly elaborates. "'I Don't Want It' encompasses what it is like to be growing up in the current state of society and how it has affected the mental health of the modern generation from a 1st and 3rd perspective. I have a lot of unhealthy habits that I am very self-aware of, however they don't seem to change and seem to manifest into worse problems which I try to ignore, this isn't really my own issue either, so many of us are aware of our own self-destructive behaviours but we ignore them for the sake of it being easier than recovery. I think the song actually took fruition when my therapist said "you're very self-aware, aren't you?". It's very much a curse that we all, especially gen Z share. Maybe because self-deprecation has become such a normalised thing, which I hate but I can't help but feed into. Writing it was a good way of me getting out a lot of behaviours I want to change about myself as well as critiquing other behaviours that society tends to normalise while growing up in your teens and early 20s. As soon as Amy sent me the riff I instantly knew I wanted to get these particular feelings out and create a song with the guys that sounds like the music I am listening to, especially when I am engaging in the behaviours mentioned in the lyrics, which has always been indie with a killer riff and a fat hook - kinda full circle in a way."

'I Don't Want It' continues a run of thrilling singles for CRAWLERS. Completed by Amy Woodall, Liv Kettle and Harry Breen, the band formed in 2018 and have been putting in the hard yards, honing their live show with gigs across Merseyside. Word began to spread and soon CRAWLERS were attracting diehards from further afield, racking up 650k followers on TikTok, the band's knack of injecting personal tales into their universal singalongs connecting on a mass scale. Using their status is of vital importance to what CRAWLERS are about. "It's really hard to find a safe space – especially for young people, queer people, and other misrepresented or underrepresented groups – and being able to do that with our platform is something we're looking forward to exploring and breaking boundaries with," they say.

The band's debut self-titled EP was released last year on Modern Sky/Lab Records and lead track 'Come Over (Again)' has clocked up over 34 million streams on Spotify, 1.8 million views on YouTube and was a Radio 1 Tune Of The Week. It became the band's first hit when it crashed into the Official UK Singles Chart. Their first Polydor release 'I Can't Drive', released in January this year, was a Jack Saunders Tune Of The Week on Radio 1, receiving rave reviews from NME, Kerrang!, Clash, DIY and Sunday Times Cultures. After supporting My Chemical Romance in May and embarking on a headline tour in North America in June, CRAWLERS will head out on a nationwide UK tour in the autumn that includes a date at London's Scala on November 2.