​FAKE SHARK
'TIME FOR THE FUTURE' 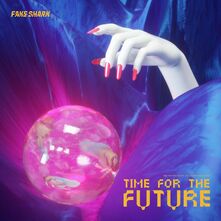 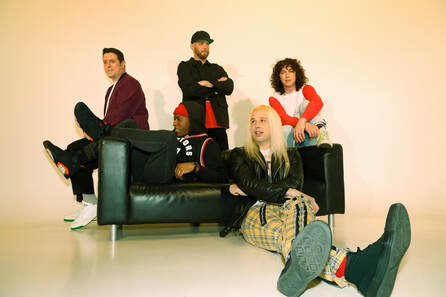 Fake Shark
Warming up audiences throughout 2021 with stellar singles, one of Canada’s hottest indie exports Fake Shark finally release their highly anticipated 4th studio album Time for the Future – which they share today alongside the music video for “Feel That Way” featuring Madison Olds.

Comprised of creative visionary Kevvy alongside Louis Wu, Tony Dallas, Alex Glassford and Jake Fox, in Time for the Future Fake Shark orchestrate an album that defines diversity. From high energy indie-punk tracks to spacey and immersive interludes; there’s a reason why they are simply one of Canada’s best bands.

Time for the Future takes inspiration from every aspect of the music spectrum, while still crafting a sonically unique body of work. Using a mixture of heavy-hitting drums, vintage crate-digging samples and powerful melodic vocals, the collective has built a whole new sound simultaneously transporting audiences to the past and future. Kevvy, the creative mind behind the project, explains “I want the music to feel nostalgic and futuristic at the same time.”  With his musical background, producing and writing for world-renowned artists like Carly Rae Jepsen, he’s got an ear for what sounds will connect to a modern audience. He adds “What do they expect to hear, and how much can I play with those expectations to create something fresh and exciting?”

Marked by three stand-out singles – the cinematic ‘80s synthwave of title track “Time for the Future”, dejected grunge-pop of “Quicksand” and ‘90s rock-tinged “Loser” – the 12-track project begins with the electro-pop fusion “Nostalgia Proof”. The track has a bold and gritty energy which evokes an ‘80s feel while staying fresh and invigorating. A pulsating future wave bassline and punchy drums play the backbone for this edgy track. Through spooky vocal drones and funky guitar riffs, the track embodies the wicked and chaotic world we live in today. Created during isolation, Kevvy explains “I saw downtown Los Angeles fall apart around me and informed my apocalyptic themes in my lyrics.” With almost melancholic undertones, the intoxicating vocals illustrate the haunting reality of an unknown future. Depicting retro-futurism, “Nostalgia Proof” sets the bar for the rest of the project.

“Why Stop” is a feel-good summer anthem representing past relationships that left Kevvy wanting more in his soul search for true love; the playful track exemplifies Fake Shark’s unique modern take on the indie-pop genre and how unapologetic they are about being themselves. The melodious vocals and joyful lyricism deliver a happy vibe elevated by a funky bass line, wavy guitar licks and an effortlessly catchy chorus.

Meanwhile, the soulful and poetic track “Feel That Way” featuring Madison Olds is further explored in a music video shot, directed and edited by the talented Steve Bays, offering a look into the band’s endless party filled life where their ambition to find love and happiness never fades. “We had some drinks, partied in a back alley and the brilliant Steve Bays filmed it,” said Kevvy. Trippy visual edits and close up shots make it hard to take your eyes off this dazzling piece of cinema.

With sold out tours in the US, UK and Japan, there is no doubt fans across the globe are amped for the release of Time for the Future, which illustrates the diverse spectrum and sheer musical talent of the group.