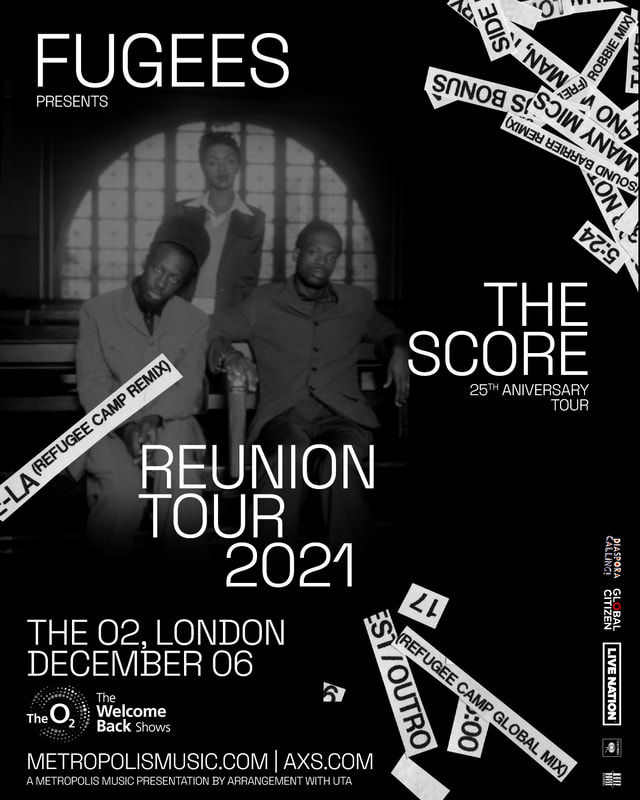 Tickets will go on sale to the general public beginning Friday, Sept 24th at 10AM Local at LiveNation.com.
HIP-HOP ICONS WILL REUNITE TO CELEBRATE THE 25TH ANNIVERSARY OF THEIR GROUNDBREAKING, CLASSIC ALBUM

Ms. Lauryn Hill, Wyclef Jean and Pras Michel of legendary hip-hop group Fugees have reunited to announce their first world tour in 25 years and first shows in 15 years to celebrate the anniversary of 1996's The Score, one of the greatest albums of all time. Presented by Diaspora Calling and produced by Live Nation the 12 city international tour will stop at London's icon The O2 Arena this December, before continuing onto the final shows in Nigeria and Ghana.

Ms. Lauryn Hill gave her thoughts on their anniversary and aspirations for the future, 'The Fugees have a complex but impactful history. I wasn't even aware the 25th anniversary had arrived until someone brought it to my attention. I decided to honor this significant project, its anniversary, and the fans who appreciated the music by creating a peaceful platform where we could unite,  perform the music we loved, and set an example of reconciliation for the world.'

When asked about the Fugees reaching the quarter of a century milestone, Wyclef said 'As I celebrate 25 years with the Fugees, my first memory was that we vowed, from the gate, we would not just do music we would be a movement. We would be a voice for the un-heard, and in these challenging times, I am grateful once again, that God has brought us together'.

The Score is one of the best-selling and most significant music albums of all time.  Upon its release, it peaked at number one on the Billboard 200 charts and earned the group two Grammy Awards. Fugees were the first hip-hop group ever to be nominated for Album Of The Year, and the nomination also marked the second only rap album to be nominated for the top accolade as well at the time. With singles including "Killing Me Softly," "Ready or Not," and "Fu-Gee-La," the highly acclaimed body of work has continued to inspire and stay in constant circulation with artists and fans alike. The seven-time platinum album has sold over 22 million copies worldwide and remains the best-selling album ever by a hip-hop group. As of 2021, the album is the fifth most-streamed rap album released in the 1990s on Spotify. The album is featured prominently on lists including Rolling Stones' "The 500 Greatest Albums of All-Time," The Source's "100 Best Rap Albums," Spin's "Top 90 Albums of the 90s," Vibe's "100 Essential Albums of the 20th Century," and more. There is no doubt the influence of the album continues to ripple throughout music and culture.

​Fugees charitable fund will partner with Global Citizen to work on philanthropic initiatives around the tour.  Global Citizen is the world's largest movement of action takers and impact makers dedicated to ending extreme poverty by 2030.  With over 10 million monthly advocates, their voices have the power to drive lasting change around sustainability, equality, and humanity.
They post, tweet, message, vote, sign, and call to inspire those who can make things happen to act — government leaders, businesses, philanthropists, artists, and citizens — together improving lives. By downloading their app, Global Citizens learn about the systemic causes of extreme poverty, take action on those issues, and earn rewards with tickets to concerts, events, and experiences all over the world. For more information, visit GlobalCitizen.org.