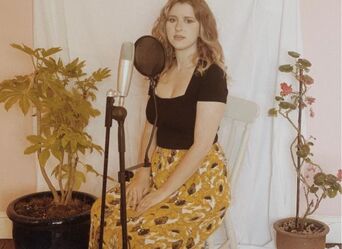 Hannah Grace has shared the video for her new single, ‘How True Is Your Love’. A funk-filled anthem, the track showcases Hannah’s strikingly soulful vocals, and premiered on Rylan’s BBC Radio 2 show earlier this month.Combining a vintage aesthetic with kaleidoscopic visuals, the video sees Hannah perform the track alone to camera. Shot by Hannah in lockdown, it highlights the intimacy and personal sentiment carried throughout the lyrics and emphasises its powerful message of bravery and self-assurance.

The new song is the latest to be taken from Hannah’s forthcoming debut album due out later this year, and follows the beautifully atmospheric ‘Wasted Love’ and her hit single ‘Blue’, which proved a smash at Radio 2, who added the track to their playlist and invited Hannah in for live sessions.

Hannah Grace has announced headline shows for this year and will play London’s Omeara on October 29th and a hometown show at Cardiff Clwb Ifor Bach on October 26th. Tickets are available now via SeeTickets.