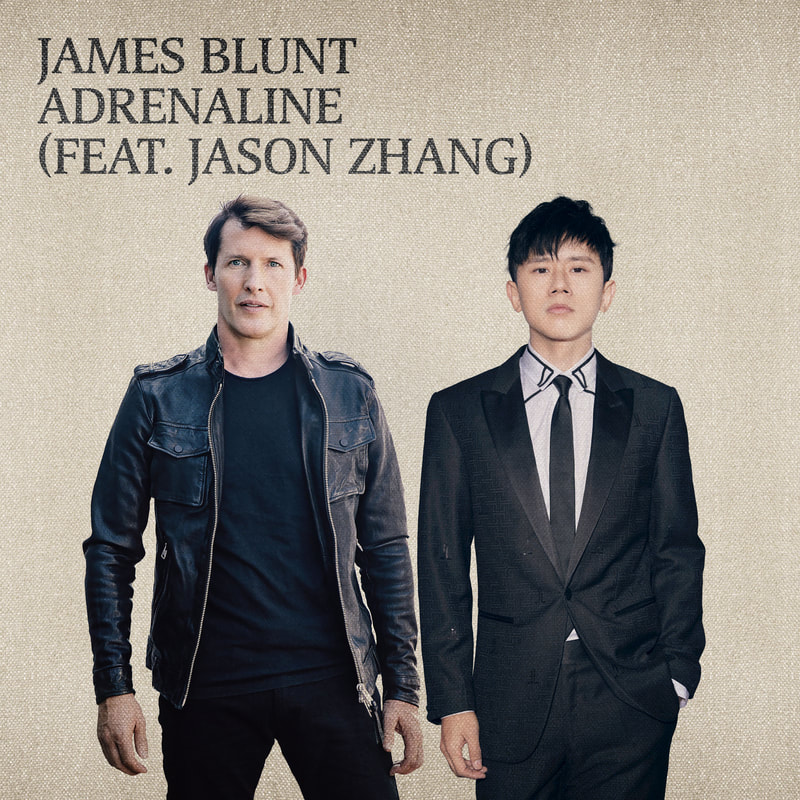 ​British icon James Blunt has teamed up with Jason Zhang, one of China’s most accomplished music stars, for a special collaborative version of the sensational single “Adrenaline” – released via Warner Music Group.

This special version of “Adrenaline” is a true partnership between two of the biggest artists in the world and a luxurious blend of James and Jason’s styles; Jason’s soft vocals perfectly offset with the richness of James’ signature vocal stylings, mixing perfectly as they take turns singing alternating verses on this infectious track.

As one of four brand new offerings from James’ current greatest hits album, The Stars Beneath My Feet (2004-2021), “Adrenaline” is a driving pop tour de force produced by Loose Change that delivers yet another memorable chorus - a trait that has remained constant throughout James’ career and is a stunning addition to the greatest hits collection - a culmination of 17 years of prolific songwriting.

Jonathan Serbin, Co-President of Warner Music Asia, said: “We are delighted to announce this collaboration between James and Jason as it puts together two of the biggest stars from the world’s largest music markets. Partnerships between Chinese and international artists are set to be a growing trend as international acts want to tap into the vast audiences here and local performers want to take their place on the global stage. Pairing these two iconic artists together means that we can further grow their global audience and amplify their success.”

Paul Samuels, VP A&R Atlantic Records UK, added: “Jason is an accomplished artist. This track allows him to build his presence across the globe, giving fans who might not have known about him the opportunity to discover his talent. For James, who has already established a strong presence in China, the track provides an exciting offering for his growing fan base in the region.  Their voices blend so well on this memorable track; they both really hope the fans will love it.”

With a combined following of 90 million across social media platforms and millions of sales to his name, Jason Zhang has spent almost two decades at the forefront of China’s mainstream music scene. Launching his career in 2004 after winning China’s reality singing competition My Show, Jason shot to further fame in 2007 after appearing on the audition program Super Boy on Hunan Television. In 2014, Jason’s name skyrocketed after he participated in Hunan Television’s hit show Singer; the iconic singing competition is opened only to renowned vocalists and came to international prominence after it was won by Jessie J.

Winning audiences over with a perfected blend of pop gems and heartfelt, emotional ballads across a whopping 15 albums, the award-winning superstar’s international presence has seen him hold 65 concerts internationally in 34 different cities including London, Milan, LA, New York, Vancouver and Sydney. Taking home more than 190 accolades over the years, Jason has been crowned ‘Best Male Singer’ 21 times, ‘Most Popular Male Singer’ 33 times and has won the award for ‘Best Song’ more than 70 times. He was named Best Asian Artist at the Mnet Asian Music Awards in South Korea, and also became the first Chinese singer to win the prestigious International Artist Award at the American Music Awards.

With this collaboration marking yet another phenomenal achievement for Jason, his stunning vocals are sure to see him making more meaningful connections with a global audience – expect more to come in 2022 and beyond.