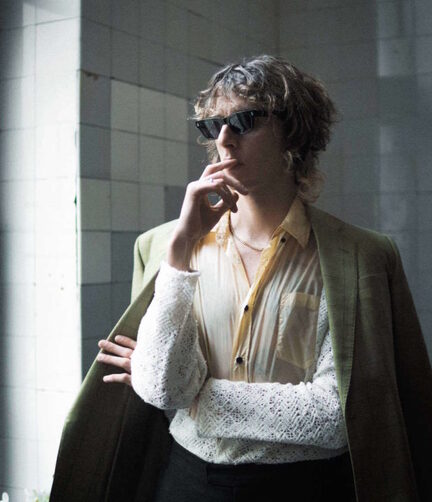 ​‘Someone’s Dog’ is a dreamy jazz-infused record oozing with soul and themed on heartbreaks and disappointments. The track is produced and mixed by Robin Eveborn, and has been recorded live with Eveborn on keys and Jesper Hättander on drums.

Regarding the single Jelly Crystal says, “‘Someone’s Dog’ is the only song that was recorded live, which distinguishes it from the other songs on the album. It’s a story about people who put you under their thumb and control you, leaving you to stumble blindly through the precarious topography of love. I wanted it to feel like a young man in an old man’s body, so old but still so modern and fresh!”

‘Someone’s Dog’ follows the release of previous singles ‘Never Met a Cloud I That Didn’t Like’ and ‘I Don’t Like Dancing’, which are both taken from the upcoming debut album and have seen Jelly Crystal receive great support from the likes of DIY Magazine, HERO Magazine, Marvin and more.

‘Never Met a Cloud That I Didn't Like’ features Off The Meds frontman Kamohelo and is a transfixing blend of African percussion, psychedelic guitars and synths along with smooth vocals and shimmering harmonies set against a mesmerising funky bassline. ‘I Don’t Like Dancing’ meanwhile is an upbeat glam-pop jaunt calling to mind the likes of Alfie Templeman matched with a suave late 70s air of Thin White Duke Bowie.

Freak Show is an astounding debut album drawing inspiration from the timeless influential sounds of the 60s and 70s yet is also injected with bold, experimental moments only 2021 could produce.

‘Sweet Lime’ is a curious post-punk, psych and world music concoction, while Jelly Crystal also enlists some of Sweden’s most exciting new music talents to guest on the record, including lo-fi indie pop singer Esther on the swooning title track, while Stella Explorer duets with Jelly Crystal on the grand ‘Bloody Mary’ which closes the album to the effect of attending a prom night on acid.

Jelly Crystal is the moniker of the Stockholm-based artist Filip Johnson. As Jelly Crystal he is the left-field glam rock street entertainer on the Sunset Strip, singing his heart out for nickels and dimes. It is the music of the worn-out organ grinder on Yellow Brick Road and a wide-eyed kid in Wonderland. Innocence and decadence are never far from each other in his dazzling presence and Freak Show is the introductory tale in his extraordinary character’s odyssey.