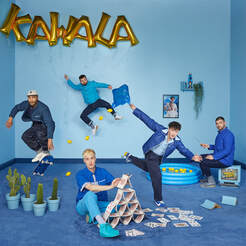 KAWALA announce the release of their debut mixtape, ‘Paradise Heights’ out via EMI Records on 23rd July.
​Hopeful and euphoric, it’s the perfect soundtrack for a summer of reconnecting with each other and the wider world. Vocalist Daniel McCarthy hopes the six luscious new songs “marks the end of a difficult period and captures that feeling of going forward into something sunny and more positive,” whilst vocalist Jim Higson believes the title “alludes to the heights we’ll hopefully reach as we all come out of lockdown.”

Paradise Heights brilliantly showcases KAWALA’s talent for upbeat, effortless song-writing. It’s a multi-layered piece of work, punchy, jubilant, and danceable with music that sometimes masks the complex emotions behind the lyrics. Pulling influences from the likes of Vampire Weekend, Bombay Bicycle Club, Phoenix, Simon and Garfunkel, John Martyn, The Staves and Crosby, Stills & Nash, as well as afro-beat and a myriad of other genres to create the band’s own unique sound.
Lead single, ‘Angry Man’ is about, “The frustratingly constant influx of incredibly angry men out there and the effect they’re having on the world” explains Daniel, the songs rich vocal harmonies and jaunty rhythms often disguising the songs honest and direct lyrical theme. Other tracks include the tropical pop-party of ‘Chasing/Wasting Time’ which finds them facing up to self-doubt in the rough-and-tumble world of the music industry, whilst ‘Ticket to Ride’ (featured on EA Sports blockbuster FIFA 2021 game) is about escapism and longing for better days. Elsewhere there’s a stunning cover of Griff and Honne’s ‘1000000x Better’ (Daniel sent it to Griff who loved it, saying, ‘Why do I feel like I'm sat on a beach right now?’) while ‘Arms Wide Open’ was co-written with The Vaccines’ Justin Young, the track is the most direct KAWALA have ever been. The emotional highpoint of the mixtape is ‘Back of My Hand’, which tackles the messy topic of the gentrification of their old stomping ground in Kentish Town.
Onstage, the band’s live shows have always felt more like a gathering of like-minded individuals and they wanted the ‘Paradise Heights’ mixtape to champion this sense of community. Fuelled by those all-to-fleeting moments of real-life connection with their fans over the last year, KAWALA set to work creating an actual place called, ‘Paradise Heights’.  It’s an immersive set that fans can be part of and one that will form the backdrop for their forthcoming live shows. The now ‘Paradise Heights HQ’ is also the base for the band’s brilliantly chaotic YouTube show –described as a cross between The Mighty Boosh meets Eric Andre Watch here

As one of the UK’s most energetic and vital new live acts and with 2021 giving us all hope, KAWALA’s infectious pop songs are guaranteed to win new audiences! Heading out this summer, the band perform on the main stage at Latitude, Truck and TRNSMT and play their biggest headline tour to date this November, with many shows already sold out/upgraded and culminating in a home-town show at the legendary Kentish Town Forum – full dates below.