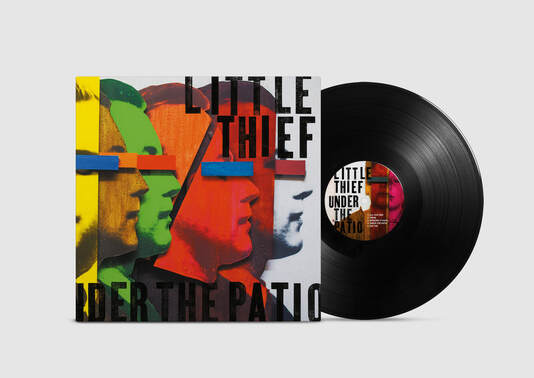 ​Hot on the heels of their recent single ‘Freak' comes the release of ‘Under The Patio’ the incredible debut album from Bristol-based rock outfit Little Thief on September 17th. Alongside the album comes its title track ‘Under The Patio’, due for release September 10th.

Formed in 2015 by long-time collaborators Charlie Fitzgerald and Rhii Williams, Little Thief have created their own brand of raw, gritty and soulful alternative rock that defines itself.  They have a handful of successful singles under their belts which have seen them play live sets at Glastonbury and Liverpool Sound City Festival, as well as receiving support from the likes of Far Out Magazine, RTE, Steve Lamacq (BBC 6), BBC Introducing, XS Manchester and Amazing Radio.

With interest in the band quickly growing, they soon began working with independent record label Funnel Records, who shaped them into the band that they are today. With the financial pressures of Covid decimating the arts industry however, Funnel Records sadly are no more, and so as a newly independent band, Little Thief had to turn to Crowdfunder to help to create their debut album, raising a whopping £5,000.

Speaking about the album, recorded with heavyweight producer Stew Jackson (Massive Attack) at Rockfield & Invada Studios, vocalist Charlie Fitzgerald states, “The album was something we worked really closely with Stew Jackson to make. It went to a pretty moody place and the process was fun and weird and everything in between. We watched a lot of Tommy Cash videos and serial killer interviews on YouTube whilst writing the album and then went to Rockfield in Wales for 10 days to record it. We teamed up early on with the incredible Paul Hopkins on his thunderous bass who was a formidable addition to the album. Paul’s bass work and Stew’s production on this one was paramount to the new Little Thief sound. We’ve worked with Paul for years, and he was a big part of the swag that has emerged through making Under The Patio. All in all we wanted to make something with a bit of swagger that was slower and hard hitting.
The album as a whole is something we are so proud of. It’s not been an easy ride, but since we held the finished vinyl in our hands, it all felt worth it.  It’s a beautiful record and we are so happy to be finally getting out into the world.”

Throughout Under The Patio, Little Thief’s visceral lyricism takes the listener on an introspective journey of human interactions, through casual lust-filled encounters, lost loves and crimes of passion all the while blending their inimitable brand of bluesy, gritty rock, unmistakable swagger, Williams’ signature groove and Fitzgerald’s cathartic, raw vocals.

Prior to the album comes it’s title track Under The Patio, a track inspired by two VERY contrasting experiences. “The first verse was written a few months previous about a beautiful relationship between a couple of our friends who were stunningly explosive and never seemed to see a boring day.  The rest actually came from having to watch a real court case about a guy who had killed his Step-Dad, cut him up and hid him in boxes under his T.V. It was pretty fucking creepy.