MALKA returns to champion gymnast roots in ‘Moving Together’ video 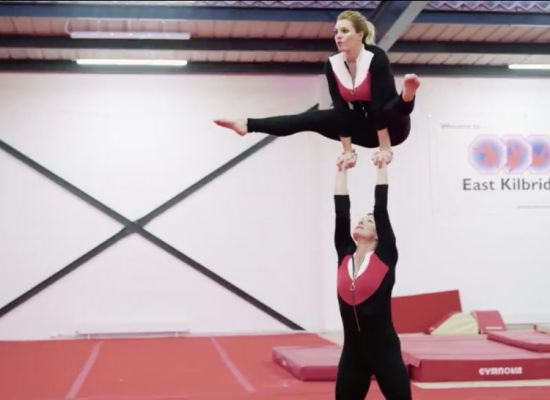 Scottish multi-instrumentalist MALKA has released the video for her new single ‘Moving Together’, taken from her forthcoming third album I’m Not Your Soldier out February 28th via Tantrum Records.

The song explores the feelings experienced in the reestablishment of old relationships, and the video finds MALKA reconnecting with her old friend and former gymnastics partner Lorna Somner.

Together the pair were Scottish gymnastics champions and were also members of the Team GB squad. ‘Moving Together’ sees the pair reconnecting to complete another gymnastics routine together after 20 years apart.

Regarding the video MALKA says, “The idea of shooting the music video came about when I got in touch with Lorna. We had competed for Scotland as gymnasts and were members of the GB squad when we were younger. I broke my ankle and retired following four consecutive years of my trio being Scottish Champions.

“At the time I was so utterly heartbroken that I couldn’t set foot in a gym again. I found it so painful to not be able to train and compete and so I lost touch with Lorna - who was like a second big sister to me growing up. Lorna went on to become a performer in Le Reve in Las Vegas and so continued her dream of performing. I moved to London and studied fashion at St Martin’s College.

“Lorna and I got back in touch when we were both expecting our first children - coincidently they were born just a few days apart. After having both of our second kids we each moved back to Scotland - Lorna a year before me.

“I had been thinking about the song and how best to create visuals for the narrative. I then had the idea of getting in touch with Lorna to see if she might be interested in performing a gymnastics routine together. She loved the idea and so we began training again - 20 years after I had retired and 5 years after Lorna had retired from Le Reve.

“We trained together for eight weeks, choreographing the routine and finding moves that we can still do together. It has been amazing to work together again - the excuse of working on the music video has afforded us the chance to reconnect just as in the lyrics in the song.”

‘Moving Together’ has been released to great acclaim. Following its premiere with Clash the song was quick to make it into the Top Tracks Of The Week selections of the likes of Refinery29, London In Stereo, BBC Radio Scotland and more. Chris Hawkins at BBC 6Music has also given the track great support at the station.

The song is the latest song to be taken from MALKA’s forthcoming album I’m Not Your Soldier and follows the release of ‘Taking It Back’ and ‘Tiny Fires’. BBC 6Music have been great supporters of MALKA with Amy Lamé, Chris Hawkins and Lauren Laverne all big fans of the singer at the station.

I’m Not Your Soldier is produced by Paul Savage (Mogwai, Franz Ferdinand, King Creosote) and is a reflective record that finds MALKA at her most personal yet.

At the core of MALKA is honest songwriting. Whether that is day-glo, clattering brilliance or a pared-down hymnal for bedtime, MALKA always remains true to herself. I’m Not Your Soldier confirms a talent for all seasons.

MALKA will be touring in support of the release next year and will play four headline shows across the country in March 2020. Tickets are available via https://www.malkamusic.co.uk/ and full dates are listed below.

I’m Not Your Soldier will be released on all DSPs, CD and unique eco-vinyl. The latter is created from recycled vinyl runs, cutting down waste and also offering fans the opportunity to own a one-off piece of vinyl, as no two are the same pattern or colour.

I'M NOT YOUR SOLDIER TRACK LISTING