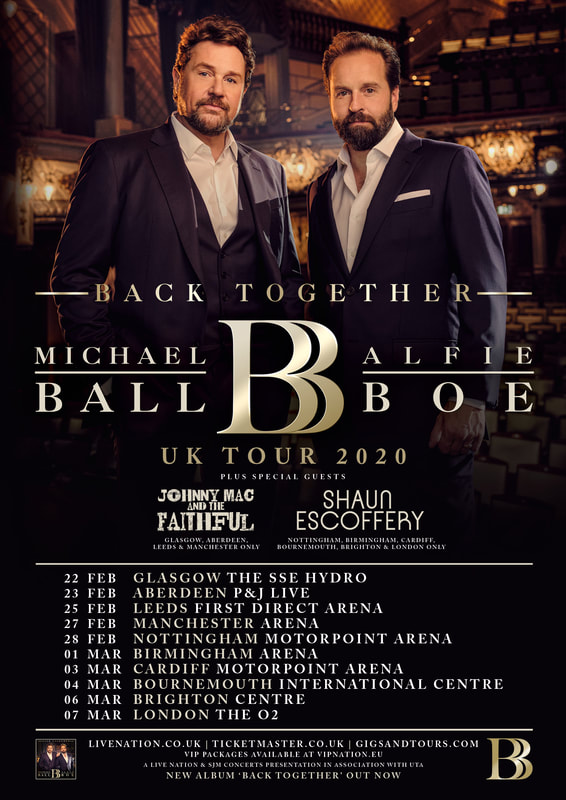 Michael Ball and Alfie Boe, have announced special guests Johnny Mac and the Faithful & Shaun Escoffery who will be supporting them on their stellar UK 2020 'Back Together' tour with tickets on sale now via Live Nation www.livenation.co.uk/

These newly announced special guests will be joining the decorated duo theatre and opera singers, Michael Ball & Alfie Boe on their 2020 'Back Together' UK tour in support of their latest album 'Back Together', while also playing many more fan favourites.

Celtic-folk and Americana band Johnny Mac and the Faithful will be joining Ball & Boe on the road for the first leg of the tour supporting at Glasgow, Aberdeen, Leeds and Manchester dates. Johnny Mac is better known in the music industry as John McLaughlin, the award-winning songwriter and producer who has penned hits for artists such as Westlife, Busted, Echo & The Bunnymen, Shane MacGowan, Sandi Thom and more recently Rod Stewart. Expect a jamboree of Celtic-folk and Rock 'n' Roll.

Shaun Escoffery will be the special guest for Nottingham, Birmingham, Cardiff, Bournemouth, Brighton and The O2 London show. Shaun Escoffery's superb soulful voice has been thrilling audiences in the West End since he was a teenager in Chaka Khan's Mama, 'I Want to Sing'. He was nominated for an Olivier for the Donmar Warehouse's Parade and was the first black actor to play Enjolras in Les Misérables and has since been starring for twelve years as Mufasa in the Lion King. Shaun Escoffery will be performing his incredible music from his most recent album.

These incredible special guests will definitely not be one's to miss on this exciting upcoming tour that starts 22nd February in Glasgow at The SSE Hydro.