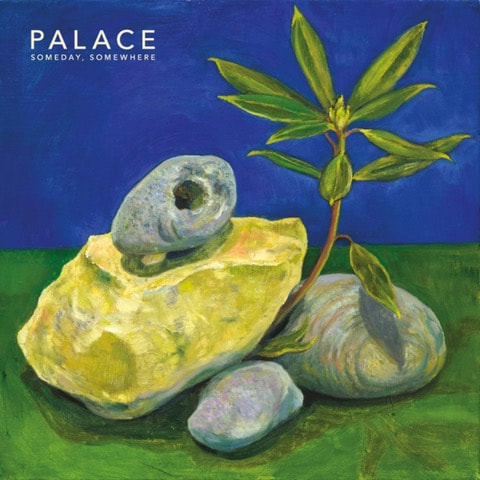 After the release of their sublime sophomore album ‘Life After’ last summer followed by sold-out UK, European and debut North American tours, London band Palace today announce the ‘Someday, Somewhere’ EP, out October 23rd via Fiction. The announcement comes alongside the release of a brand new single “I’ll Be Fine”, written and recorded by the band remotely during lockdown.

LISTEN TO “I’LL BE FINE” HERE

The ‘Someday, Somewhere’ EP is otherwise made up of unreleased tracks recorded during the ‘Life After’ album sessions including its much-loved title track, which was previously a live set exclusive. The 3 track EP will be released digitally and also as a limited 12” vinyl edition including the bonus track ‘Trouble On The Water’ as previously released on the band’s ‘Hoxa Sessions’ acoustic EP. The 12” vinyl is available to pre-order alongside brand-new merch HERE

2019’s sophomore album ‘Life After’ is a stunning record with a clear message; hope. Its eleven tracks are full of the melodic warmth and rich textures that have come to define Palace’s sound. It is an album in equal parts about loss as well as a manual to moving on, stronger than before. “While there are a couple of different threads to the record, ultimately there’s a romance to it alongside a feeling of looking to the future through a new lens.” Says frontman Leo; “While still being aware of the unknown, you can allow yourself to feel hopeful, stronger and grateful for what you’ve got.”


from a band who have built a loyal global fanbase for their uniquely bittersweet arrangements, earning critical acclaim, a number 1 on the Official Record Store Chart and leading to over 100 million streams across their catalogue worldwide. After demoing the tracks at their Tottenham studio The Arch, Palace turned to Catherine Marks (2018’s UK Producer of the Year; St Vincent, Wolf Alice and PJ Harvey) at Willesden’s Assault & Battery studios and Luke Smith (Foals, Slow Club) at Jump Studios in Tottenham to record the album in summer 2018.

Leo Wyndham, Matt Hodges and Rupert Turner have been friends since they were thirteen and released their acclaimed debut EP ‘Lost In The Night’ in 2014, followed by the ‘Chase The Light’ EP the following year and their debut album ‘So Long Forever’ in 2016. The strength of those releases saw their fanbase steadily grow, leading to extensive touring, ever-larger festival slots and culminating in a sold-out UK headline tour including London’s Shepherds Bush Empire.

Having built a dedicated live following through mesmerising shows at some of the country’s finest venues, Palace played some of the world’s biggest festivals last summer including Mad Cool, Latitude and Glastonbury’s Park Stage before an autumn tour culminating at their biggest show ever at a sold-out Camden Roundhouse. The band kicked off 2020 by selling out their debut USA tour and were due to play yet-another UK tour this March until Covid-19 forced the band to cancel.