Patricia Lalor
releases new EP
‘This Is How We Connect, While You Stand So Tall’ 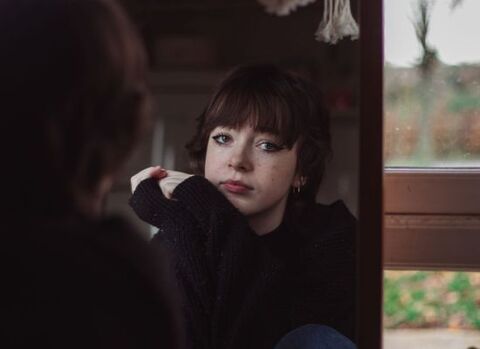 Marking the release she has revealed a video for the mesmeric indie anthem ‘Same Place Again’.
This Is How We Connect, While You Stand So Tall is a stunning collection of lo-fi alt-pop gems including the previous singles ‘This Man Thought He Saved Me’ and ‘To Cope’ alongside the new song ‘Felt Something Finally’, which has been highlighted in Spotify’s New Music Friday today.Spotify have been huge champions of Patricia in 2020 and have featured every original single she has released this year in their New Music Friday playlist.
This Is How We Connect, While You Stand So Tall  is the third original EP from Patricia Lalor this year following Do It Again  and Sleep Talk,  which have been met by great acclaim and turning the heads of tastemakers including The Independent, DIY Magazine, Refinery29, Sunday People, In Stereo Magazine, Hot Press, Irish Tatler, Indie 88, Ones To Watch and more.
The 15-year-old Wexford singer has been tipped as the next Billie Eilish, while she has also drawn comparisons to the likes of Warpaint, beabadoobee and Clairo.
2020 has also seen Patricia release Covers EP1, which found the young musician putting her compelling twist on some of her favourite songs and biggest musical influences. Patricia originally rose to prominence via her covers and started uploading them to YouTube age 11. She has since gone on to achieve 164,000 subscribers to her channel.
This Is How We Connect, While You Stand So Tall continues to showcase Patricia’s consistency for evocative vocals, sharp lyrics and fascinating music with songwriting talents far ahead of her years.
THIS IS HOW WE CONNECT, WHILE YOU STAND SO TALL TRACK LISTING
This Man Thought He Saved Me
To Cope
Same Place Again
Felt Something Finally
--
“Patricia looks set to cement herself as the next cool girl on the chilled alt-pop scene”
DIY
“There’s no denying she’s one of most exciting up-and-comers in the scene today”
Our Culture
“Patricia Lalor, youth not taken into account even, is one to watch”
Nialler9
“Thoughtful indie-pop that belies her young age”
Hot Press
“The poetic lyrics and delivery only enhance the slightly off-kilter feel.
Definitely one to watch!”
Songwriting Magazine
“Patricia Lalor is the perfect addition to your quarantine soundtrack”
Ones To Watch
"To call Patricia Lalor a phenom or prodigy would be a disservice to her immense talent."
The Revue