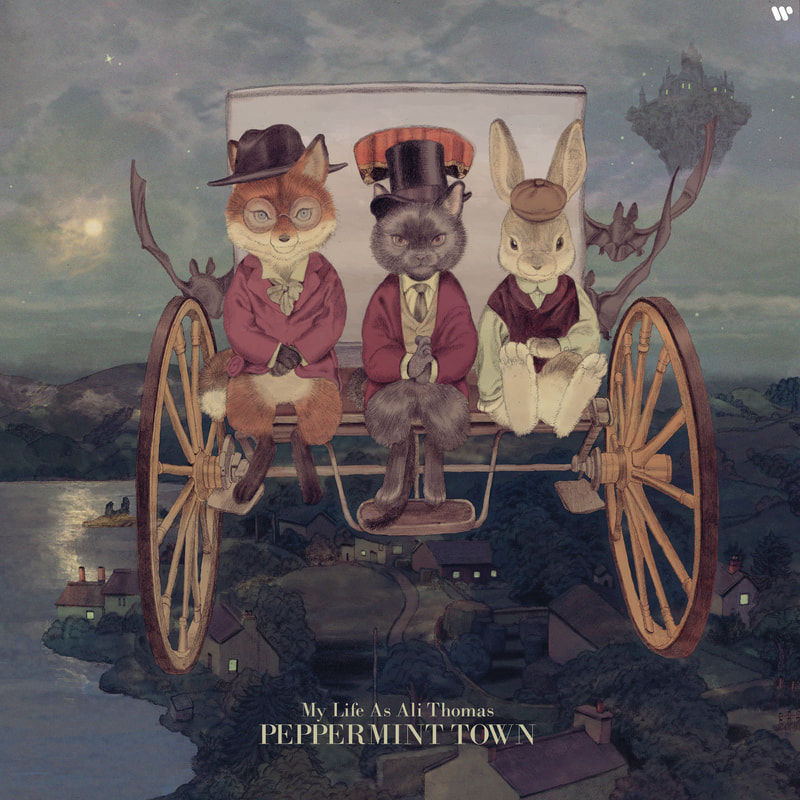 A dynamic and beautifully crafted collection of ten tracks, Peppermint Town encapsulates the band’s affection for nurturing innate, free-flowing artistic expressions, an attitude which has seen them become one of Thailand’s most creatively forward-thinking groups. Continuing to push sonic and genre barriers throughout, the band create a nostalgic dreamland to recapture the fond ‘growing days’ of frontwoman Pie’s youth in Australia.

From the delicate folk influence of “Baby I Love You” to the roar of indie anthem “Pitch Black”, the varied and hypnotic tracks piece together through distinct ambient textures and organic instrumentation. Contrasting the lo-fi crunchiness of “Dear all the universe” with the blues infused melodies in “Tears of a Clown”, My Life as Ali Thomas showcase their affinity for expressing themselves outside of the confines of genre, whilst simultaneously forging a sound that is unique to them.

The album’s leading single “Ocean” reflects the crashing of waves as it catapults into oblivion, cushioned by entrancing guitar layers and earth-shattering drums, topped off by frontwoman Pie’s signature poetic lyricism. Also serving as Peppermint Town’s closer, “Ocean” encapsulates the profound, heartfelt nature of My Life as Ali Thomas’ artistry.

The band shared the following about Peppermint Town: “Peppermint Town is a second shot at making an album. We never thought that My Life as Ali Thomas would have come this far, this band wouldn’t have a second chapter if it weren’t because of our fans and friends who believe in us, who brought us here. We feel that we owe it to them to truly be ourselves, be the best that we could be as artists; we owe it to the people who love to dream, and so we paint the dreams as wide and as free as we could. We wish that by showing courage, by being brave through our work that maybe it could inspire others, that we always have a choice in everything. All the artworks for this album are some proof that Thailand is filled with amazing artists. We wish for there to be more space for people who are creative, who share the same passion in the arts. The album cover is a painting of a fox, a cat and a rabbit; those are supposed to be us transformed into cartoons, because when we enter Peppermint Town, we leave everything behind. Peppermint Town is the time to be whatever we want to be.”

Speaking on “Ocean”, the band said: “Ocean is layers. Ocean is depth, dreams, and fears. Ocean is a secret. Ocean is light, and it is darkness. Ocean is a monster, and a friend. This song is a neoclassical piece combining classical orchestral instruments with modern. It’s definitely something new for us. We take a picture, and with respect, we went and captured the ocean and its reflection.”

Forming in 2014, front woman “Pie” Kanyapak Wuttara, guitarist “Rack” Wipata Lertpanya and drummer “Taw” Wannaphong Jangbumrung describe their free-spirited musical style as “pouring everything we like into one big pot”. Not adhering to one set genre, the band blend atmospheric Brit rock influences with indie-pop inspirations with Pie’s distinctive folk sensibilities; her soft, yet highly emotive vocal presence and poetic aptitude shining at the heart of every track.

Conquering the online streaming space with numbers reaching millions through placements on key editorial Spotify playlists, the band has gained success through regular appearances at significant Asian music festivals such as Big Mountain Festival, CAT Expo and Bangkok Music City. The band effortlessly made history in 2019 when they became the first Thai act to play at the renowned SXSW Festival in Austin, TX – a testament to the burgeoning international appeal of My Life as Ali Thomas, which glistens with each solid release from the band.

Despite being frontrunners in Thailand’s artistic scene, their popularity is somewhat rare as their experimental style doesn’t adhere to the country’s ‘typical’ pop music norms. Aiming to encourage listeners and other artists in the industry to be totally themselves in their unique creative expressions, the band dream of a knock-on effect to undo the somewhat cultural close mindedness which seemingly runs through mainstream conscience.

Receiving countless letters from young creatives who speak of their connection to the music and how it’s brought them out from dark places, My Life as Ali Thomas have garnered a fanbase of introverts and artistic outsiders; some of whom draw the band in real-time during live shows. Though the band didn’t initially set out to represent the underground ‘misfits’, they have become a welcoming space for listeners to escape their troubles.

The band’s ‘out of the box’ tendencies bleed into all aspects of their creative expression. For her personal style, Pie draws on Fred Astaire for inspiration for her personal style. Excited by the ‘old Hollywood’ era, she dresses in predominantly suits and tuxedos, describing androgynous fashion statements as ‘classic’ and ‘underrated’ in modern society. Pie says: “I think people should be able to do what they want to do and be who they want to be. If other people give you shit for it, then fuck ‘em. They can live their lives, and we live ours.”

Growing up inspired by stage plays and recreating pamphlets, Pie’s signature poetic lyricism runs deep in Peppermint Town. Though Thai by heritage, none of the band’s music is written or performed in their mother tongue, as Pie describes the fluidity of the English language to be freer for artistic expression. By doing so she is able to experiment with English linguistic norms, such as punctuation and tense (including writing ‘backwards’), without the restrictions she finds with modern Thai language.

An ever insightful and intriguing collective, Pie, Rack and Taw are hopeful for their future. With the support of their loyal fanbase and the ever-increasing accolades under their belt, the personal, euphoric and emotionally honest Peppermint Town marks a huge milestone on their trajectory towards international credibility.