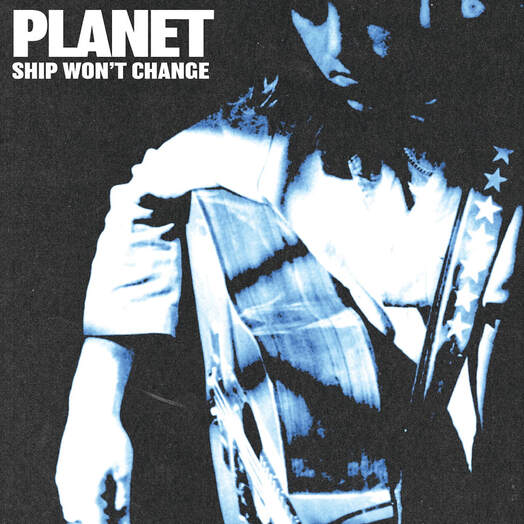 “Australian group PLANET aren't short of ambition. The group have an innate urge to communication, something that leads them to build songs that are capable of filling arenas.”
CLASH

“Soaring indie rock from a band that knows how to write.”
TRIPLE J

Laced with shimmering acoustic strums, buzzing lead lines and a swinging beat – all tied together by Matty Took’s inimitable voice – ‘Ship Won’t Change’ sets out as summer indie rock ballad, eventually building to a euphoric, orchestral crescendo. Produced and mixed by the band and Adrian Bushby (Muse, Foo Fighters), ‘Ship Won’t Change’ is written as a letter to a relationship that deep down feels doomed, it’s a shining example of the band’s signature alt-pop sound, while also striving to be something much larger than the sum of its parts.

Filmed in Sydney’s Inner Western suburbs, a former working class and industrial area, now home to some of the country’s most exciting artists, the accompanying video suits it brilliantly. Dappled in golden hour sunlight and summer evening hues, the clip acts as a simple yet effective mirror to the vibrant feel of the song and the band’s ability to craft effortlessly gazey, dream-pop anthems.

Lead vocalist and frontman Matty Took explains “‘Ship Won’t Change’ was a latecomer to the mix (of album songs) - the song itself came together pretty easily as it’s a classic folk tune at heart. I sent the demo over to Tommy and he came back straight away with that vibey guitar that comes in the second verse. He added some cool synth and string sounds which were eventually tracked for real by Pete Whitfield in Manchester. During the mixing process, we wanted to add in harmonies - Lily & Grace from CLEWS came to mind straight away. They came round and nailed the whole song in like 30 mins... such great musicians. The lyrics are about being in a relationship but always feeling like it could fuck up at any time, so much that it makes you feel whack. The ‘ship’, being the relationship and trying to keep it from changing.”

Guitarist Tommy Peppitt adds “We’re all missing playing live - this video was a no-frills approach of getting us all together in a room and capturing the song in its most raw form.”

Returning from a 12-month hiatus with previous release ‘Resign’, PLANET - Took, Peppitt, plus drummer Harry Stewart-Weeks and bassist Jimmy Weaver - have achieved international acclaim from the likes of ROLLING STONE, NME and CLASH, alongside boasting over three million Spotify streams to date.

With a bunch of brand-new songs in the vault and whispers of a forthcoming album, PLANET look set to generate more serious waves and excel into mainstream acclaim.