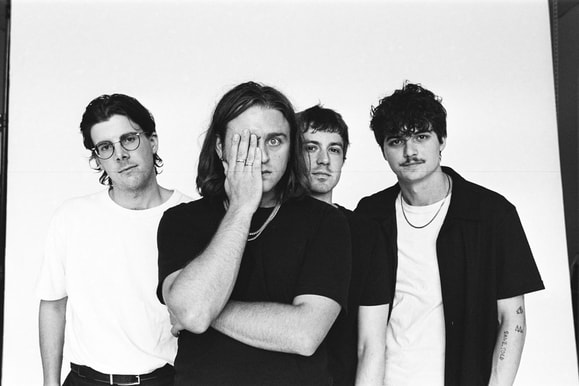 “Stunning compositions, immersive live shows… it’s hard not to fall in love with all that they do”
ROLLING STONE


Rising Australian gaze-pop group PLANET are back with the euphoric “Resign”, their eagerly anticipated first release of 2021.

“Resign” opens with a dynamic wall of lush guitar chords and searing licks over a punchy, driving rhythm section. Compelling alt-pop vocal hooks push the track forward towards the heartfelt, anthemic release of its chorus: “I’m breaking at the seams // Life was always short”. Lyrically, the song offers a deft counterpoint to the summery pop of the music in its powerful articulation of the crushing moments of self-doubt that can be experienced in a relationship.

Lead vocalist/guitarist Matty Took explains: “Resign is a pop summer anthem with the instrumentation hitting you straight in the face. Lyrically, it's about not being enough in someone's eyes and how it affects you to the point of collapse, but trying to break past it to make it work.”

Guitarist Tommy Peppitt adds: “It’s the first track we’ve released that was written completely in lockdown. I had the chorus laying in the vault and sent it back and forth with Matty, fleshing it out and finishing it off.” The finished track is co-produced with PLANET by Grammy Award-winner Adrian Bushby (Muse, New Order, Placebo, U2, Foo Fighters), and co-engineered with the band by long-time collaborator Lachlan Mitchell.

The song’s video was filmed just a few blocks from Took’s home in Sydney, as options were limited due to lockdown restrictions. Ultimately though, the simple honesty of the video’s single shot is an effective mirror to the candour of the song’s lyrics, as well as reflecting the sunny feel of the music.

Since their debut in 2017, Sydney band PLANET – Took, Peppitt, plus drummer Harry Stewart-Weeks and bassist Jimmy Weaver – have built a growing and dedicated fanbase with a series of singles, EPs, and international tours alongside the likes of Liam Gallagher. The band have clocked up more than 2 million streams on Spotify alone, as well as attracting coverage from the likes of ROLLING STONE, NME, INDIE IS NOT A GENRE and SAVAGE THRILLS – all without having yet released an album.

The undeniable hook-craft and universal relatability of “Resign” look set to make it a massive song for the rest of the summer, and to make 2021 the year PLANET cross over from underground buzz into mainstream acclaim.