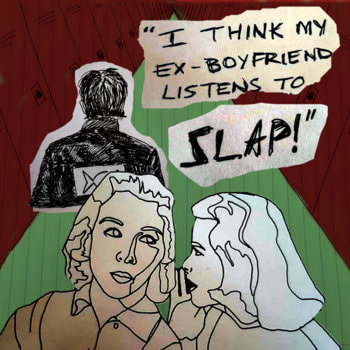 From start to finish the latest album from punk rock trio SL.AP is a triumph.

While the entire album is heavily punk inspired it is hard to ignore the early heavy metal influences which adorn this record.

From the Maiden-esque intro to title track 'I Think My Ex-boyfriend Listens To Slap ' to the very heavy Motorhead undertones featured in 'Greed Is Good' 80's metal is alive and kicking and with a heady shot of Sex Pistols thrown in there for good measure, Slap have managed to bring the two worlds of Metal and Punk together in 'I Think My Ex-boyfriend Listens To Slap'.

Granted, this is not for the feint hearted, and is rather explicit at times but all that aside the album is a well rounded package.

Who knows what the SL.AP will do next but one thing is for sure it will be fast and loud.

'I Think My Ex-boyfriend Listens To Slap ' is available to pre-order here and is due for release on 31st of October.
Artwork by @trashwearartthou