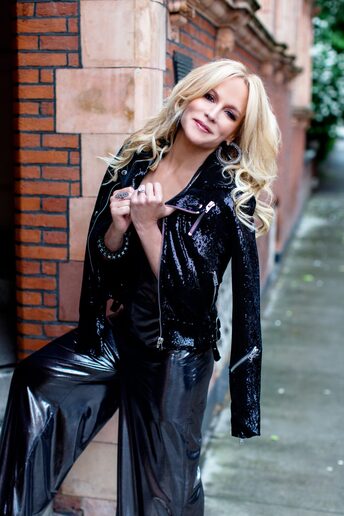 With her new single, FLIPSIDE, Stacey plays into the 80s nostalgia whilst making it her own, with empowering lyrics about taking risks and being true to yourself.

FLIPSIDE IS OUT NOW

Recorded in London, Stacey Jackson worked with longtime collaborator and co-writer Ramzi Sleiman, who has worked with the likes of The Overtones, LuLu, Westlife, Taio Cruz, T2 and Mis-teeq. FLIPSIDE has a deliberate 1980s pop feel, and was therefore the perfect track to use as an introduction to Stacey’s 80s nostalgia pop TV Show, Stacey Jackson in the 80s (Spotlight TV, Sky Channel 365 and Freest 500).

FLIPSIDE is an anthem of empowerment, but it’s also so much more than that. Stacey Jackson has been up against her fair share of obstacles; as an older woman in the public eye, certain parts of her career have been an uphill struggle. On FLIPSIDE, she pours her self assertion and determination into every syllable, convincing us and, in the process, herself, that she’s got staying power.

“I had literally finished writing the song right before I even landed the TV series! So when the producer of the show asked me if I could suggest a pop track we could use for the theme song - it was almost spiritual! Such a crazy coincidence!” says Stacey. “The lyrics came to me quite quickly because it’s all about taking risks to become a better ‘you’, even when you have so many commitments in life and are being pulled in so many different directions.” Current pop icons like Dua Lipa and The Weeknd are all referencing 80 pop, and so Stacey felt she could contribute to the trend - from the perspective of someone who was there first time around!

Stacey Jackson is a singer/songwriter, entrepreneur, TV presenter & mother of four.
She became an inspiration for stay-at-home moms when she shot to fame, having launched her music career at age 40. Following the chart success of her debut single, Stacey has gone on to release four albums & over a dozen singles, and recorded “Live It Up” with legendary rapper Snoop Dogg. The record recently celebrated its 10th anniversary and has been rebooted & relaunched in June 2021. She has also worked with Papa Levi & prolific dance music producers & remixers such as C-Rod and Dave Audé. She’s toured the world from stadiums to floats at Pride, stepping out in her trademark high heels & hot-pants.

As fitness also plays a huge part in Stacey’s life, she launched her patented workout top called Staefit – created to tackle issues women may have while working out and through her online workout videos she encourages women to be the best possible versions of themselves. Her weekly music show, Stacey Jackson In The 80s, also premiered in June 2021 on Spotlight TV which airs on Sky as well as other satellite providers.


FLIPSIDE was released on the 10th December 2021.
Stacey’s novel “How Snoop Dogg Made Me A Better Mom” is set to be released Summer 2022.