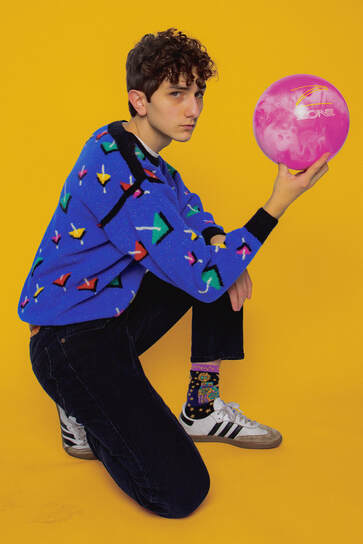 "Flores pieces together a scene that sounds like laidback dance floors — the type of cool down, "last call for drinks" energy of a dive bar where you've kept the tab open all night to escape your thoughts." - Paper Magazine

When Joseph Flores first dreamed up TEMPOREX as a teenager in his San Diego bedroom, his only aim was to see if he could make a song that sounded like Tyler, The Creator or something that would fit in the world of Super Mario Galaxy. Now in his early 20s, he’s already toured internationally and racked up 80 million plays on Spotify. Yet, despite this recognition, his aim remains the same: to make music that radiates from his bedroom to people all over the world, providing them a soundtrack to sing to, dance to, dream to, watch ducks to, drive 90mph to – and anything else it makes them feel like doing.

He wrote, recorded and produced almost the entirety of his new sophomore album Bowling on his own in his bedroom, crafting a uniquely vibrant and immersive world. In all facets, Bowling displays the artistic and conceptual growth of TEMPOREX as a creator and as a project. “I feel like I’m entering a new lane,” he says of his evolution. “This project is just me throwing a ball down a lane and seeing if I get a strike.” On the 10 track collection, TEMPOREX invites us to spend some time in his vibrant musical world – but the game in these multidimensional lanes is much more complex, layered, and high-stakes than 10 pins and a ball.

The years following the unexpected success of his mini-album Care have been defining ones for TEMPOREX, as he’s had to come to terms with the pressure of knowing millions are listening all over the world and are anticipating great things on the follow-up. While the influences of modern peers like Jerry Paper, Homeshake and Mac DeMarco were the foundation of Care, TEMPOREX has deepened and expanded his musical knowledge coming into Bowling, which has impacted and augmented his songwriting and production. The suave extravagance of Prince and D’Angelo are evident in the strutting dance numbers, the glistening grace of Cocteau Twins is reflected in the crystalline production, the visual flair of Gorillaz is present in the world he’s created, and the heart-on-sleeve songwriting of Paul McCartney and Prefab Sprout are echoed in his honest lyricism. His musical universe is ever-expanding, and all these artists and more have become deeply encoded in the DNA of TEMPOREX’s music.

Only a couple of trusted collaborators have made contributions to Bowling: Chicago alt-songwriter Paul Cherry brings his guitar to “Delayed”, while producer/engineer Adam Thien (Post Animal, The Aubreys) had some input on a few other tracks. However the growth in the project’s sound all stems from TEMPOREX himself: “I need full control or a majority of control over whatever I’m working on in order to feel fully satisfied with the end product,” he admits.

Having spent countless hours finding the right filters, piecing together chord progressions, and honing his guitar skills, the results are a polychromatic triumph. His ability to escape into his own sound world has helped TEMPOREX navigate a turbulent few years in his emotional life too, and he bravely brings these lessons and insecurities to light on Bowling. His deep connection with his girlfriend, which was forged through a mutual love of music, provides one of the backbones of the record, and across Bowling he candidly lets us in on the difficulties of managing a long-distance relationship in the modern day.

On “Batter” he likens the maintenance of a committed relationship to the care and precision needed to make a cake – promising “I’ll come down with an easy bake oven next time.” Lead single “Delayed” reflects on he and his girlfriend using the unreliable California train service to ride up and down the coast to see each other; packing snacks, waltzing together, wiling away the hours in a cloud of bliss before it’s time to depart. Intimacy is a theme that’s continued on “At Peace”, where TEMPOREX revels in the ultimate sign of trust and understanding: feeling so much bliss that he passes out with ease in her presence.

Not everything in the Bowling universe is so sweet though. TEMPOREX wallows in his heartache on the brooding R&B of opener “Bad Pin”, where he laments “you can’t stop telling me why I’m so bad.” Another highlight is the gloom-laden ballad “Plastic Lester”, which he calls “the darkest point on the album” as it finds him acknowledging his self-hate. The psychedelic following track “GUI” finds him employing a punchy drum pattern and harsher synth tones to reflect his reckoning with loss and fatigue.

But when TEMPOREX is feeling himself, there’s no stopping him. He owns the dancefloor at the intergalactic nightclub on the heady “Milton Post”, he confidently struts down the catwalk and hits strike after strike on two-step channelling banger “New Lane”, and roses sing to him on the retro prom anthem “Little Star”. This all culminates in the ecstatic and gleaming closer “U Open Up a Window”, in which he pays thanks to all those people and things that have helped him through: love and music prime among them.

As becomes obvious from spending time in the intergalactic lanes of Bowling, TEMPOREX is also an artist in other media, and he approaches his music with a visual sense too, ensuring it not only sounds right, but looks and feels true to what he’s expressing. “I think what brings music and visuals together is that they both can make you feel a certain way,” he says. “In the end, it’s all feeling.” His affinity for image has led him down endless internet wormholes to unexpected fascinations with 80s CBS kids show Peewee’s Play House, grainy 90s Nintendo advertisements, and forgotten CD-ROM graphic adventure games like Prince Interactive.

The definition of a new generation DIY artist, TEMPOREX masterminds the entire spectrum of his world, from production to art direction to the CGI in his videos. His unique presence in the musical landscape has seen him come from relative obscurity to open for US superstar Omar Apollo in 2019 and he was set to go on the road with one of the hottest artists of the moment in Mxmtoon before the global pandemic struck.

One of the most captivating and nuanced young artists coming through right now, this new full-length body of work stands to mark 2021 as a milestone year for an artist constantly breaking barriers between the virtual and physical worlds.