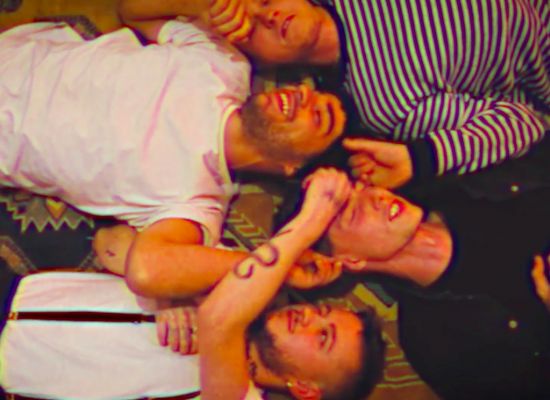 The Jacques have revealed a hallucinatory video for their recent single ‘Do Me For A Fool’.The video follows the announcement of their forthcoming debut album The Four Five Three, out November 6th via Modern Sky, available to pre-order now here.


‘Do Me For A Fool’ finds the London indie collective trading chaos for calm, blending dreamy guitar lines with an infectiously pop-infused undercurrent. The track is a laid-back musing on romance, with singer Finn O’Brien’s woozy, nonchalant vocals providing a gritty counterpoint to its lusciously saccharine instrumentals. The song was recorded at Morsecode Studios, Glasgow and is produced by Liam McCluskey.
The accompanying video channels the songs vibes perfectly, taking you for a hazy lullaby-like ride as the band traverses both their musical capabilities and their individual boundaries and fragilities.
"In the video for ‘Do Me For A Fool’, we wanted to show a softer side to us that we hadn't explored in previous videos,” explains Finn. “The track itself uses bubblegum pop melodies to discuss the temptations involved in a toxic relationship. By sharing footage of us enjoying each other's company and being intimate with one another, we hope to further expose our vulnerabilities through the prism of pop."
Video director Jennie Foot says, "There’s a playful, pop energy in ‘Do Me For A Fool’ that I was looking to represent visually in an intimate domestic space, where nothing is off the table and anything goes. The video is a whirlwind invitation into the unique minds of the brilliantly creative and equally crazy band that are The Jacques."
‘Do Me For A Fool’ is taken from the upcoming debut album The Four Five Three, a record of remarkable songs hewn from a range of tragically ragged, sweet and tender adolescent experiences you can’t quite believe have been crammed into such a slight number of collective years.
But therein lies the rub: The Jacques may have unremarkable musical origins emanating out of the fields and towns of rural England, best visualised in that seminal British comedy This Country, with all the boredoms and eccentricities associated with the social isolation of such communities. But their personal journey is a unique tale of triumph over adversity and, like the best kind of drama – and theirs is quite definitely a drama - one of gain through loss.
The Jacques are Finn O’Brien (voice, guitar), Elliot O’Brien (drums), Harry Thomas (keyboards) and James Lay (bass), although it hasn’t always been this way. Past members include Jake and Oliver Edwards, Clint Trembath and Gabriel Ciechan, but the death of long-term bass player Will J Hicks in March 2019 hit them hard.
Relations amongst the previous line-ups had already soured when Finn met Will whilst studying Art at Goldsmiths College in 2016. Initially, Finn and Will didn’t hit it off, but a blossoming close friendship ensued and, together with the addition of Harry on keyboards, a new fuller, less-guitar centric sound emerged. James had already started rehearsing with the four-piece when tragedy struck.
“It was hard,” says Finn now. “We played so many songs with Will that meant such a lot. But we decided to carry on.”
James subsequently joined on a permanent basis and The Jacques resumed professional duties as best they could, releasing a series of singles throughout 2019 including the fuzzy post-punk of ‘Kiss The Pharaoh’, which features on The Four Five Three. The song hums and clatters like early-Horrors, yet delivers piercing offhand lyricism which Finn describes as having a, “anarchistic and a creepy, nursery rhyme thing going on.”
It’s a track that has propelled them to receive strong support from BBC 6Music with Huw Stephens, Steve Lamacq, Don Letts and Huey Morgan all big fans of the band at the station.
The album also features the recently released single ‘Swift Martin’, a bleak and unnerving track of pulsating synths and distorted guitar lines along with songs like ‘Cradle My Heart’ – about each of us having our own versions of God – and ‘Holy Mamacita’; a love song with a twist, about letting someone down.
However it’s perhaps ‘Hendrik’ and ‘Taste The Mexican Sun’ that showcase The Jacques at their most sentimental and their most playful. ‘Hendrik’ is the oldest track on the album and was renamed to celebrate one of Finn’s closest friends who had always loved the song before he passed away; and ‘Taste The Mexican Sun’ takes its title from a seemingly-meaningless caption Finn and Will noticed on a plastic cup whilst hanging out at a music festival.
Remarkable enough in themselves, they segue effortlessly into the album’s closer, ‘God’s Lick’, a song that evokes bittersweet memories of endless jamming sessions when Will was in the band. It’s a beautifully poignant way to finish this emotional rollercoaster of a record.