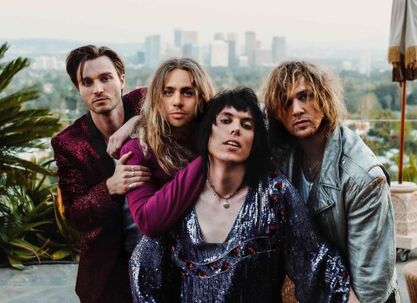 British rockers The Struts have released their stunning new album Strange Days today, October 16th, on Interscope / Polydor Records. The sound of one of Britain’s most promising guitar bands …crossing the rock Rubicon to stake their claim as our next global superstars”


“The heirs to the Queen’s flamboyant throne”
Daily Star
“These songs are proper sweaty crowd-pleasers that really belong in an arena or, even better, a stadium”


The Arts Desk
Several songs on Strange Days are graced with an appearance from rock-and-roll royalty — an organic turn of events for a band who opened for The Rolling Stones before they’d even put out their first album.
On the lead single 'Another Hit of Showmanship'(released in August), The Struts teamed up with Albert Hammond Jr of The Strokes, who adorned the song with his stunning guitar work. Meanwhile, their majestic follow-up single 'Strange Days’ features the unforgettable vocals of incomparable pop legend Robbie Williams.
'I Hate How Much I Want You', an explosive collaboration with Def Leppard’s Phil Collen and Joe Elliott finds Struts frontman Luke Spiller trading throat-shredding vocals with Elliott to magnificent effect. Meanwhile, Collen unleashes his notoriously ferocious guitar work, a perfect counterpart to the track’s swaggering groove, thunderous drumming, and shout-along-ready chorus.
And on ‘Wild Child’, Rage Against The Machine’s Tom Morello joins Spiller, guitarist Adam Slack, bassist Jed Elliott, and drummer Gethin Davies for a fierce and filthy anthem that marks their heaviest track to date.
Elsewhere the explosive ‘All Dressed Up (With Nowhere To Go)’ unfolds in snarling power chords and exquisitely cheeky lyrics while the beautifully weary ‘Burn It Down’, finds The Struts slipping into a bittersweet mood, serving up a slow-burning ballad that sounds straight from the sessions for Exile on Main St. The sole cover song on Strange Days, ‘Do You Love Me’ sees The Struts updating a fantastically sleazy track first recorded by KISS in 1976.
The follow-up to The Struts’ acclaimed 2018 album YOUNG & DANGEROUS, Strange Days came to life over the course of a charmed and frenzied burst of creativity last spring. After getting tested for COVID-19, the band all moved into the Los Angeles home of producer Jon Levine and immediately set to work.
Within just ten days of couch-crashing at Levine’s house, The Struts had laid down nine original tracks and a masterful cover of a KISS B-side: a lean, mean body of work that amounts to their most glorious output to date. Mixed by Claudius Mittendorfer (Panic! At the Disco, Arctic Monkeys, Johnny Marr), the result is a powerhouse album that lifts The Struts’ glammed-up breed of modern rock to entirely new and wildly thrilling heights.
The band also have a number of dates confirmed for March 2021. The shows will be An Acoustic Evening With The Struts and will take place in conjunction with local UK record stores. Fans can get tickets when they purchase the album in a ticket bundle from their chosen retailer. Tickets are available here.
MARCH 2021
Mon 1st – Beartree Records: Foundry, Sheffield
Tues 2nd – Crash Records: Wardrobe, Leeds
Wed 3rd – Banquet Records: Pryzm, Kingston
Thurs 4th – Vinilo Records: 1896, Southampton