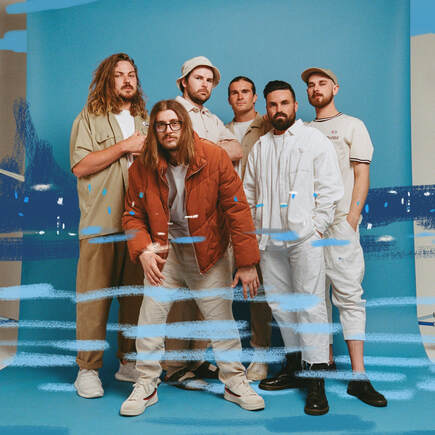 Photo: Jordan Munns @Jordankmunns
For their first single of 2022, Sydney six-piece Winston Surfshirt deliver their latest blend of funk-soul with the Genesis Owusu assisted ‘There’s Only One’ – released via BMG.

Consistent to their hip hop groove blueprint, ’There’s Only One’ weaves funk beats with vibrant basslines for an addictive 70’s nostalgia. Offsetting Winston’s signature falsettos, the stylised vocals from Genesis Owusu deepen the track into a multi-faceted sonic experience. A soundtrack for your sundowner’s, ’There’s Only One’ lyrically explores love’s loyalty with finding “the one”.

As winner of ‘Best Album by an Australian Artist’ in the BandLab NME Awards 2022, Genesis Owusu is a unique voice on the Australian music scene, generating immense buzz from his stylish artistry. A seamless merge of sounds, ‘There’s Only One’ marks another iconic collaboration from Winston Surfshirt and a new dimension to their genre-blending sound.

‘There’s Only One’ comes off the back of Winston Surfshirt’s recent feel-good bop ‘Complicated’, featuring critically and commercially adored electronic producer Young Franco. With multi-platinum releases and sell-out tours, the collective has laid down a serious foundation while generating credible buzz amongst fans and industry tastemakers including NME, ROLLING STONE, COLORSXSTUDIOS and CLASH.

Originally beginning as a solo project consisting of frontman, singer, producer and rapper Winston, the six-piece group organically came together when he called upon some of his closest friends and local artists to collaborate and establish the globally cherished musical collective they are today. Since the band’s esteemed debut project and triple j Feature Album, “Sponge Cake”, to the present day, the boys have garnered widespread praise from international music connoisseurs including Beats 1 hosts Zane Lowe, Sir Elton John, Jason Bentley (KCRW), Huw Stephens, Phil Taggart (BBC Radio 1), and Lauren Laverne (BBC Radio 6).

Blurring the lines between soul, funk and hip hop, Winston Surfshirt continue their ascent as one of Australia’s most beloved acts. Adding to their repertoire of unforgettable collaborations with ‘There’s Only One’, this latest slice of funk-soul will be one to remember.